Why Brent Foster Is a Rising Director to Watch

Trends and Insight 345 Add to collection 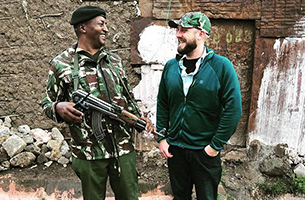 While he's still new to the commercial world, Brent Foster has already directed significant campaigns for established brands like General Motors, Purolator, CIBC, Nike, and Huawei. Holiday Films’ founder and executive producer, Derek Sewell, has seen plenty of directors come and go but thinks there is something special about Foster. “Brent’s genuineness as a person is steeped into every film he does. He seems to inherently be able to identify and incorporate the core of a story into his work in a beautiful, unaffected way. In the world of marketing where real stories resonate, we’re looking forward to supporting Brent as he takes his place amongst the very best.”

Foster began his career as a photojournalist for the LA Times and also did freelance assignments in India for the New York Times and Time Magazine. “As a photojournalist, you're not able to fake or ask anyone to repeat something, ever,” says Foster. “You learn to see light as it is and predict how people are going to move or react in certain situations. You also really learn what real looks like. The way light in a house at night falls on a subject, or how shadows project on a face of a farmer in the early morning as they're tilling their land. This is hugely beneficial in the commercial world because you can use those skills to capture many found moments on set, and you also have the awareness to create and control light while still keeping things feeling authentic on camera.”

Once the storytelling seed was planted in Foster through his photojournalism assignments it was a natural step into filmmaking. “I fell in love with visual storytelling through the people I met and had the fortune to capture on camera,” says Foster. “I was fascinated with their stories, and what made them tick. My genuine curiosity for those around me and the way they choose to live their lives was what made me fall in love with directing and storytelling in the first place. It's also what continues to impact my work today.”

Asked how this can apply to his commercial filmmaking, Foster says: “Whether I'm working with hired talent or real people, I love to connect with my subject, allow them a space to be comfortable, and that ultimately brings out genuine performances on screen.”

Between commercial assignments Foster has been honing his craft on a series of short documentaries called – While I’m Here, the Legacy Project. “I started this project with the idea of documenting people who are living legacies, everyday people doing extraordinary things, and telling their stories while they are still here with us,” says Foster. “My short film from this year 'ENOUGH' tells the story of an incredible group of elder women in Korogocho, one of Nairobi's most dangerous slums. The project was submitted to the Shots Awards and won silver in the New Director of the Year competition. It was also shortlisted for a Young Directors Award in Cannes and was featured in National Geographic's Short Film Showcase.” ENOUGH also landed Foster as a first-time finalist at the prestigious Ciclope Awards, a show celebrating the craft of filmmaking where he was up against the best directors in the world with budgets that dwarfed his. Foster was also included in the 'On the Cusp of Greatness' showcase at the 1.4 Awards for ENOUGH.

As Foster’s reputation grows he’s become more in demand for global projects. He recently completed a major launch of the new Huawei Mate 20 Pro phone for DDB Tribal Poland. Agencies love his attention to detail, his creative vision, and his easy-going nature. "Brent is a natural storyteller so it's been an easy transition into online videos. Agencies really appreciate his ability to humanise their brand stories." says Nimble Content EP Michael Corbiere. That sense of humanity is also echoed by Nimble Content Exec Producer, Andrew Lynch, "Creatives value his collaborative approach. Brent has a calm and methodical manner that inspires confidence from the entire team. He's a total pro."

Brent Foster is represented Holiday Films and Nimble Content in Canada, by Spindle in the UK, and GoEast for Eastern Europe, Asia, and the Middle East.