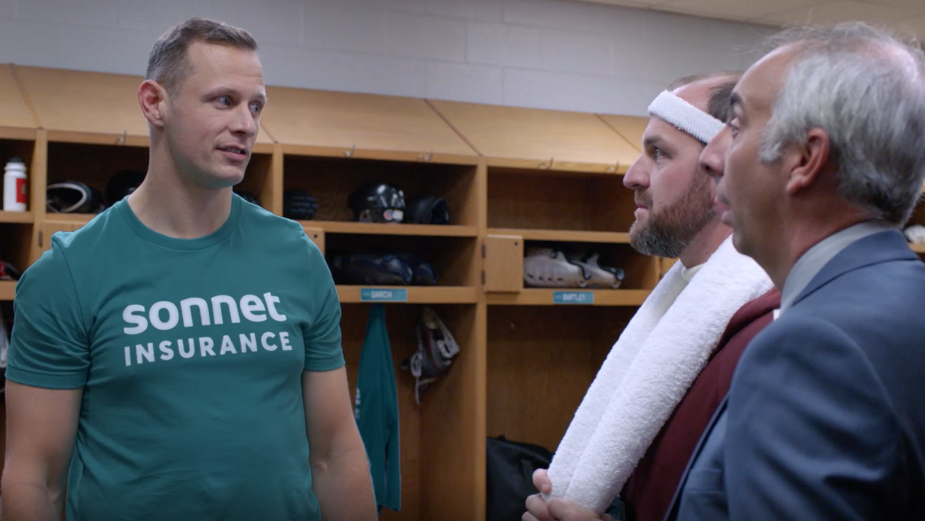 Put Jim Whitney, Jamie Way and Bob Rice in a room and it won’t be long before the laughter starts, and the ideas begin to flow. The three are the creative and executional force behind the last four Sonnet Insurance advertising campaigns.

Sonnet was the first Canadian insurance company with a 100% online purchasing process. Under the leadership of SVP of Sonnet Roger Dunbar, the company has enlisted the help of Whitney Creative to pass this message on to consumers in uniquely funny ways.

The most recent campaign, titled 'Breakthroughs', includes two spots created in partnership with the NHL Players Association. 'Explosive Stick' and 'Legs' each absurdly contrast a remarkable new breakthrough with the ease of buying insurance through Sonnet’s platform.

Jim writes and does the voice-over work, Jamie art directs, and Bob directs, though they will tell you that every stage of each project is a collaborative effort. “It starts with three funny guys who get along and respect each other,” says Jamie.

“I like working with Jamie because he’s secure. He has no ego, and he is always on,” says Jim. “Bob has earned our trust. He’s an equal in terms of judgement and input. He’s on the ground floor of the creative.”

“Jim and Jamie are professionals,” adds Bob. “They are idea machines and understand that the best ideas come from a give and take and exploring options.”

The respect and trust they have for each other are the foundation of their creative development process. “Nobody can be precious,” says Bob. “You can’t hang onto something because it’s your idea. If you squeeze out a turd, you are expected to have the decency to kick sand on it and walk away.”

Experience is the key, as far as Jamie is concerned. “We have the confidence to let ideas go because we know we’ll be able come up with new ones.”

Once the scripts are finalized the creative journey has only just begun. “It starts with a script, but we don’t settle with that,” says Jamie. “We are open to alternate reads or visuals until the final step in the process. Each script is a creative project from beginning to end.” The Sonnet team is a big part of the journey with Roger and his team of marketing experts providing important feedback at each stage.

A few years ago, Sonnet re-imagined their offering and their creative group did the same. Rather than the traditional staggered, passing of the baton at each stage, they are accessing each other’s talents from the start to the finish. The process keeps the door open for the unexpected and leads to the best possible result.

The final word goes to Roger Dunbar, SVP at Sonnet Insurance. “We’re extremely proud of the team that we’ve assembled and the history of outstanding results that Sonnet has had. We have a long list of expectations that must be met for our internal marketing groups to succeed and our partners at Whitney Creative Consultancy and the Holiday United Group deliver on those every time. After four years of working together, this group is becoming better at it after each round.”