DIY Giant Ronseal Apologises for Misleading Customers. And It's Brilliant 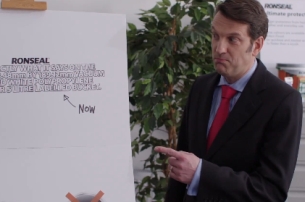 DIY giant Ronseal has dropped its iconic ‘Does Exactly What it Says on the Tin’ strapline after a barrage of comments from eagle-eyed tweeters, suggesting the Ronseal strapline might not be doing exactly what it says.

Although the performance of the brand’s products was never in doubt, bosses decided to revamp the 21-year-old DEWISOTT slogan after consumers pointed out the award-winning ranges now come in buckets, tubs, pots or tubes rather than metal tins.

Over the last few weeks, customers have been taking to social media sites like Twitter to point out the error – lobbying bosses to get the strapline changed.

As they make clear, the development of more modern packaging means the strapline isn’t as accurate as it could be.

To put things right, and preserve the brand’s reputation for honesty and straight-talking, Ronseal have devised a series of new slogans that better reflect the kind of containers their products are supplied in.

With more than 200 different products in the DIY product range, making each and every Ronseal product do exactly what it says on the tub/container/tube/pot hasn’t been an easy task, but the brand’s Marketing and Distribution teams have worked round-the-clock to make it happen.

To say sorry for any misunderstanding the Ronseal Marketing Team has been working with multi-award winning communications agency BJL & production company The Mob on a series of heartfelt apologies. As well as taking out full-page press advertisements, they’ve drafted in Ronseal Managing Director Martin Jones, to create his own apology video.

With some expert help from The Mob, the film sees him saying sorry personally to customers and explaining why the much-loved strapline – the third most famous in the world – had to go.

Speaking about the changes, a spokesman for Ronseal, said: “The new strapline might not be as memorable as the old one but it is certainly more honest. We hope now the general public will continue to admire our approach - and trust our marketing as much as our products”.