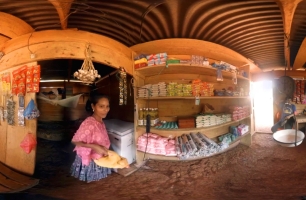 New York/San Francisco-based content creation/production company BODEGA director Mark Littman visits a developing Guatemalan community in an immersive 360° video experience for NYC-based nonprofit Trickle Up. The experiences launched at Trickle Up’s Annual Gala on April 6, 2016 in NYC, and place viewers in five environments that are pillars of this hardworking community. The VR component was crafted to elevate the level of empathy that viewers feel by surrounding them with the challenges that these communities face. The experiences can be viewed with Google Cardboard as well as through Trickle Up’s site in 360° video and on mobile and web browsers.

Littman also created two original docu-style films that showcase program participants in Trickle Up’s Guatemala region. One features Victoria, a woman who has faced the challenge her son Selvin’s physical disabilities have had on his ability to work by opening her own successful family store. The second film celebrates the achievements of the Las Azucenas community savings group, one of most prosperous examples of Trickle Up’s cornerstone program to promote financial independence through social empowerment.

With only two days on the ground, Littman and team shot their interviews and b-roll footage while simultaneously scouting the best locations to create their 360° environmental videos that would best represent this community. Ultimately, they created immersive snapshots of the women’s savings group’s space, Selvin’s family store, Selvin’s family dwelling and yard and the bustling village marketplace.

“Being able to visit these poverty-stricken areas, meeting the people and seeing how much they are able to live on a daily basis is really impactful,” says Littman. “The VR component of this project will really enable viewers to have that same experience and foster a deeper understanding of what an important impact this organization really can have.”

Trickle Up works with the world’s poorest and most vulnerable people to help them achieve financial independence and social connection.