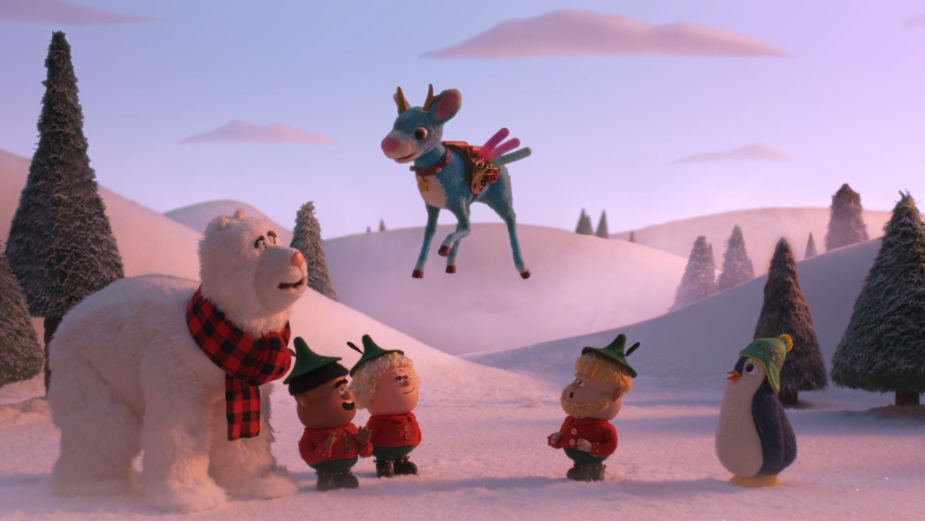 Macy’s will spread wonder with Tiptoe, a special, little, blue reindeer who will defy imagination as a first-of-its-kind walking animated balloon at the Macy’s Thanksgiving Day Parade and inspire all to believe in the wonder of the season. Macy’s holiday campaign, 'Tiptoe & The Flying Machine', stars a bright-eyed and lovable blue reindeer on the verge of realizing her ultimate dream, to join Santa’s Sleigh Team and deliver magic around the world on Christmas Eve. The new powerful and emotional film - created by BBDO New York and directed by Nexus' Conor Finnegan - allows viewers to see the magic of the season through childlike eyes and understand what it means to believe in yourself. Tiptoe’s story will come to life through a fully integrated campaign including holiday windows, TV, social, and custom Tiptoe plushies for gifting to Make-A-Wish kids and local charities.

“Macy’s shines during the holidays, bringing friends and family of all generations together, to enjoy memorable iconic events and spread joy through finding the perfect gift online or in-store,” said Rich Lennox, Macy’s chief customer officer. “With Tiptoe & The Flying Machine, we’ve created one of our most powerful campaigns to date, bringing to life the magic and wonder of the season, while further positioning Macy’s as the ultimate gift destination and Believe as our emotional epicenter for the holidays.”

Tiptoe is afraid to fly, but her friends Polar Bear and Penguin know she is just nervous. To help boost her confidence, they take her to the North Pole’s greatest makers (the Elves) who produce their greatest invention yet, a Barometrically Elevating Levitation Instigation Engine with Vehicular Enhancement a.k.a a flying machine. During Tiptoe’s flying test with Santa, the flying machine begins to malfunction and Tiptoe starts to wobble and drop, when suddenly she looks back and sees an inscription that reads B.E.L.I.E.V.E. The words encourage Tiptoe, and she begins flying up into the sky over Santa’s workshop. From that day on, Tiptoe was never scared to fly again, because she knows the courage she needed isn’t in some machine, it was in herself all along. As Tiptoe flies happily, we cut to a dad holding a reindeer doll that looks just like Tiptoe, telling his daughter the story as they wait for their plane at the airport. Tiptoe’s heartfelt story gives the little girl the confidence she needs to fly. 'Tiptoe & The Flying Machine' is a story filled with joy, optimism, family, and ability to overcome big obstacles with the support and love of family and good friends.

Created by BBDO New York, the 30-second anthemic spot will air across television and online video. A 60-second film will air airing during the Macy’s Thanksgiving Day Parade, along with robust supportive content, including interactive digital features across Facebook, Instagram and Snapchat.

To officially kick-off the magic of the holiday season, Tiptoe will march down Manhattan on Thanksgiving morning as a puppeted animated balloon, cheered on by her co-stars Penguin and Polar Bear on the accompanying North Pole Believe float. She will sit on top of the iconic Herald Square store marquee in New York and her magical story will be featured in holiday windows at Macy’s flagships including State Street in Chicago and Union Square in San Francisco. Tiptoe will also be featured at Macy’s Santaland. To spread even more joy this holiday season, 1,000 Tiptoe custom plushies will be gifted to Make-A-Wish kids and local charities.