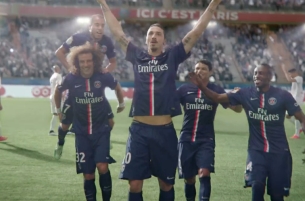 In order to portray the legend-heavy match taking place at Paris Saint-Germain’s home stadium, every element, from the stadium to the individual audience members, had to be replicated. Together with director Augusto Fraga, The Ambassadors’ VFX Supervisor Halbo van der Klaauw had only 40-minutes to film each player in a green screen studio.

OOREDOO-INTERNATIONAL 60 from The Ambassadors on Vimeo.

Augusto Fraga, director, comments: “It’s quite an art to get the most out of working with big stars, as you are always challenged by their extremely tight timeframes. That’s one of the reasons why I wanted to bring in The Ambassadors, as they’re currently building a rather impressive reputation for working with celebrity football players. You really have to utilize your time well, so, by bringing them in as early as possible in the process, we could be sure that we would get the most out of the limited amount of time we had with the players.”

Halbo van der Klaauw, VFX Supervisor and Founder, The Ambassadors, adds: “In preparation for the actual shoot in the green studio, we practiced with stand-in actors to make sure that we would get exactly what we needed out of the 40-minutes we had with each player. From featuring the biggest football legends in the world, to advanced CGI crowd replications, this spot was exactly the sort of thing that we love to do.

“We also composed and produced an original music track in-house, which reflects the pace and vibrance of this exciting spot. The sound design really enables us to build that tension and create a certain atmosphere, we’re all very pleased with the end result.”

Ray Barakat, Partner and Executive producer, Clandestino Films, concludes: "The team at Clandestino is extremely satisfied with the remarkable post-production work The Ambassadors has achieved. It was a pleasure working with everyone!"

Nasser Marafih, group CEO, Ooredoo, said: “This campaign will be one of our most significant global initiatives to date, as we reach out to young fans around the world. Paris Saint-Germain are one of the top teams of the moment, and working with them gives Ooredoo the chance to share our message of enriching people’s lives through technology. We are working to support our customers’ digital lifestyles across our footprint, and this campaign is an excellent platform to showcase our bigger, faster networks.”