Behind the Work 524 Add to collection 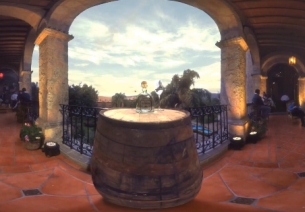 Now, thanks to a forward-thinking virtual reality project by New York agency firstborn, tequila connoisseurs can experience how Patrón is made – all through the eyes of the humble bee. The VR experience is a first for the brand. It involves the tricky combination of live-action and CGI, and was filmed on location at the Hacienda Patrón in Jalisco, Mexico. It was shot using a specialised, custom-built drone which was fitted with seven GoPros and operated by a licensed drone pilot due to the complicated nature of the shoot. LBB’s Addison Capper chatted with firstborn Associate Creative Director, Jonathan Kim, to find out more.

LBB> This VR experience combines live action with CGI, which is apparently a particularly tricky process in VR. Why is it so challenging and why did you feel comfortable taking the leap with Patrón?

JK> When creating traditional visual effects work, it’s already a challenge to combine what you shoot on one camera with CG animation. To create ‘The Art of Patrón’, we had to stitch together the output from seven cameras to create a full 360° world and then marry rich, cinematic CG on top of that to further enhance the experience.

We were able to take the leap with Patrón because there was a mutual trust and vision. Not all clients are fully comfortable investing in new technology, but Patrón not only gave us permission to explore unchartered territory; they encouraged us to push boundaries throughout the project.

LBB> What kind of issues did working like that throw up?

JK> The entire production and post-production process was very iterative – because this is a new realm for VR and there weren’t any shortcuts or tools when we started, we had to figure it all out as we went along. So the entire project was a massive R&D session! Fortunately, we already had experience creating live action VR and we were able to pair that with the talents of our in-house VFX artists – the combined teams navigated these complexities and created their own solutions in real-time to bring the Hacienda Patrón distillery to life.

LBB> I imagine the production involved quite the journey! Where did it take you? Any interesting stories to tell us?

JK> We wanted to create the most authentic experience possible, so we shot on location in Patrón’s working distillery – while they were still in production! We had to be very strategic about when we shot each part of the journey so as not to disrupt the process, but it allowed us to capture the actual members of the Hacienda team and feature them in the final VR experience. Everyone was so accommodating, and celebrating together at the wrap party with the world’s best tequila was definitely a highlight.

LBB> The whole idea is entertaining but it’s also got an educational edge to it. How did you go about striking that balance?

JK> Patrón is exceptionally proud of how their tequila is made – the artisanal crafting is what sets them apart. After experiencing it first-hand for ourselves, we were humbled by that and wanted to make sure that the step-by-step process was always center stage. To make it feel a little different than a traditional distillery tour, we brought in the perspective of the bee and layered in rich CG animation to highlight the bee’s journey through the Hacienda.

LBB> The experience is seen through the eye of a bee - why is that?

JK> The bee is an iconic part of Patrón’s identity, and it is also a natural part of the tequila-making process – bees are attracted to the agave plants. Our creative vision was to highlight this ‘love story’ between a bee and the agave as it is harvested from the fields and transformed into Patrón tequila. It’s a nod to the love and care that goes into each bottle of Patrón.

A bee’s-eye view was also a unique way to share the Hacienda experience and it allowed us to take participants closer to the actual process than most real-life Hacienda visitors.

LBB> What kind of research was involved for this project?

JK> We did a lot of research around the boundaries we could push with VR technology. For instance, after studying the flight patterns of bees, we did extensive testing on spontaneous movements – we wanted to make sure the user experience was authentic to the bee, but also not to the detriment of the user’s sense of balance. We were also very fortunate to take several field visits to the distillery, which usually resulted in a few tequila tastings.

LBB> How did you clue yourself up on the art of making tequila? Was heading to the distillery an eye opener?

JK> The first research we did was visiting Jalisco, Mexico to tour the Patrón Hacienda ourselves. From the agave fields to bottling, being able to see how many different hands – not machines – touched the process gave us a new appreciation for the amount of love, attention and pride that goes into every bottle. It was very inspirational for our process.

LBB> What were the trickiest components and how did you overcome?

JK> Because we were playing in such an emerging space, software shortcuts and pipeline tools began appearing towards the end of the project. We constantly had to re-evaluate whether we should adopt these new tools or continue to move forward with our own custom solutions, which in the end was the right choice.

LBB> Where can we try the experience?

JK> The ‘Art of Patrón Virtual Reality Experience’ will be offered globally at Patrón events, educational seminars, and at select on- and off-premise retailers. A 360-degree web experience is also available at www.patrontequila.com/art-of-patron/vr, along with behind-the-scenes footage.