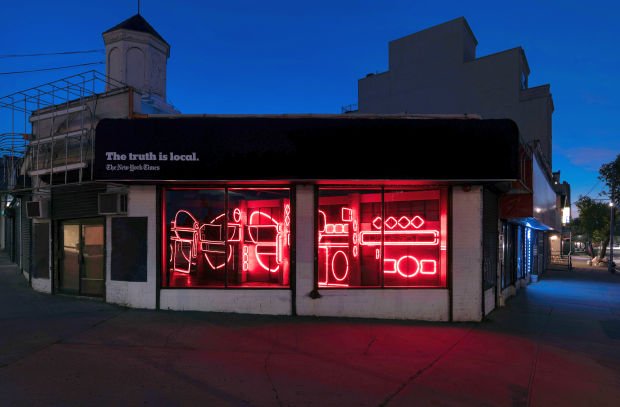 The New York Times is demonstrating its commitment to its hometown of New York City through a series of journalism installations housed in storefronts throughout the five boroughs, a new ad that showcases its rigorous reporting on the M.T.A. and a new Local Edition Collection of merchandise from The New York Times Store. Local Projects spearheads the campaign alongside The New York Times with storefront installations whilst Droga5 provides a new film. The newspaper's 'The Truth Is Local' campaign aims to show that The Times has been covering issues that have affected New Yorkers for nearly 170 years, and that they should subscribe to help support its reporting.
The campaign coincides with The Times investing even more in local journalism as of late. Metro editor Cliff Levy just last month announced the creation of a new Metro investigative unit, on the heels of the desk’s two-part bombshell into the collapse of the city’s taxi industry.
From June 10 through later this month, The Times invites New Yorkers to:
Experience The Times’s Impact in Their Neighborhood:
Local reporting brought to life through installations in vacant storefronts will include:
-    Bringing justice to Brooklyn: Frances Robles spent months revealing how a well-known homicide detective and the district attorney’s office used fake confessions, discredited witnesses and other tactics to put innocent men behind bars. The investigation, which began with “Review of 50 Brooklyn Murder Cases Ordered,” written with N.R. Kleinfield, led to the ouster of the district attorney and, over the next few years, the overturning of about a dozen murder convictions.
This installation, located at 400 Atlantic Avenue, reveals an endless New York jail cell. As viewers spend time at the storefront, lights symbolize the freeing of the innocent. 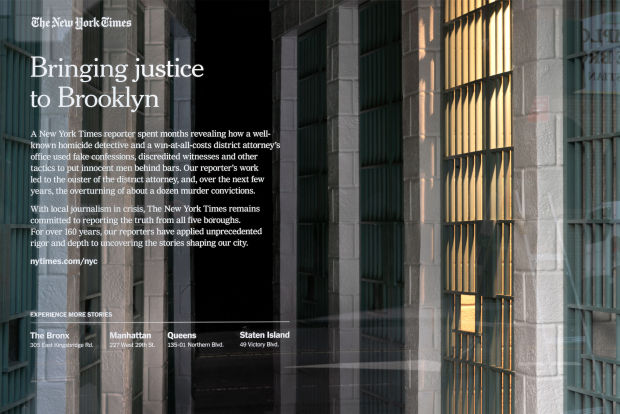 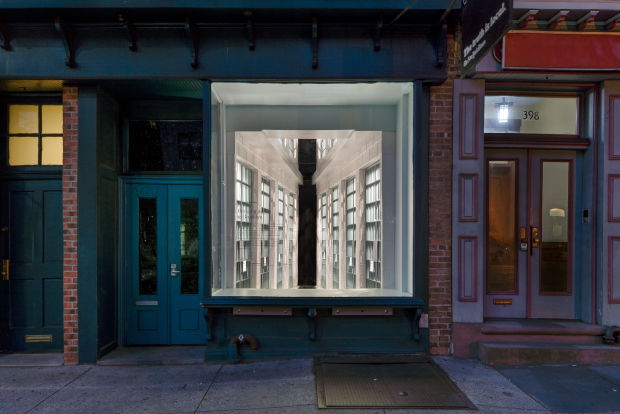 -    Exposing educational inequality in the Bronx: Eliza Shapiro has conducted dozens of on-the-ground interviews and visited schools and facilities all over the city to uncover the most complete statistics on school enrollment for her stories on city education, including her latest, “How New York’s Elite Public Schools Lost Their Black and Hispanic Students.”
This installation, located at 305 East Kingsbridge Road, puts viewers into the shoes of Bronx students who don’t have access to equal educational opportunities and resources. 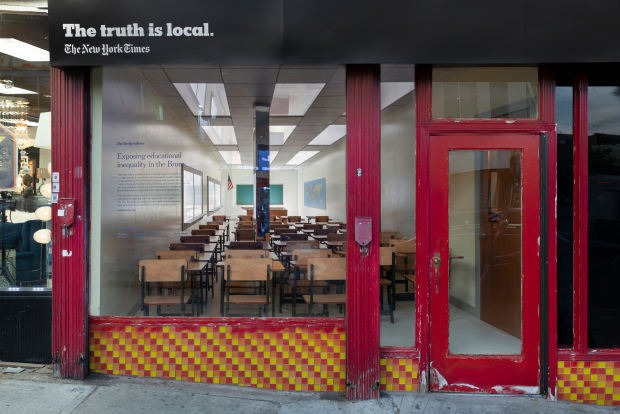 -    Investigating reckless lending in Manhattan: The Times uncovered that reckless lending, extortionate taxi medallion prices and undue pressure on drivers pushed city taxi drivers into devastating debts. During 10 months of reporting, Brian M. Rosenthal interviewed more than 400 people, created a database of all medallion sales since 1995 and studied thousands of financial documents for his stories “‘They Were Conned’: How Reckless Loans Devastated a Generation of Taxi Drivers” and “As Thousands of Taxi Drivers Were Trapped in Loans, Top Officials Counted the Money.”
The installation, located at 227 West 29 Street, offers an angled point of view on a lone taxi moving down a dark, vacant and constricted one-way street.
-    Honoring the life and death of a Queens woman: After Dan Barry spotted a newspaper headline crassly summarising a woman’s death during a police sting operation, he and Jeffrey E. Singer spent nearly a year uncovering her story. They delved into Song Yang’s life and death, immersing themselves into 40th Road — where she had worked as a massage parlor worker. In their story, “The Case of Jane Doe Ponytail,” they revealed the exploitative world of massage parlors, the dreams and struggles of recently arrived immigrants and the fullness of Song Yang’s life.
In this installation, located at 135-01 Northern Boulevard, neon signs cling to buildings to mimic Flushing’s 40th Road from one angle, and from the other, they cohere into a butterfly — manifesting one of the story subject’s favorite images. 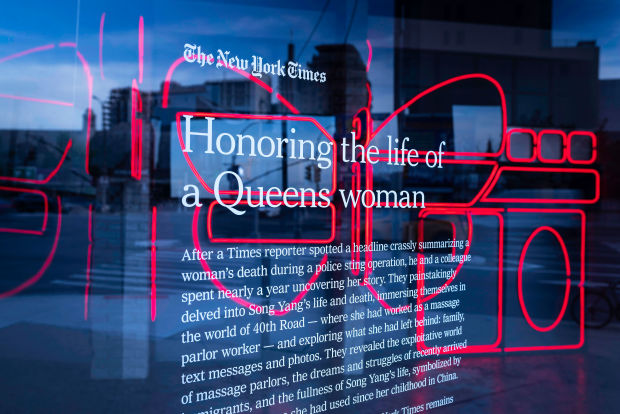 -    Unearthing Staten Island’s lost history: After suffering through the long commute from Staten Island to Manhattan and learning of a long-abandoned subway tunnel intended to connect Staten Island and Brooklyn, Amisha Padnani launched into two years of extensive research. Stonewalled by the M.T.A., she cobbled together the story of how this subway project failed — and how its absence shaped Staten Island today — for her story “A Subway to Staten Island? How a Transit Dream Died.”
This installation, located at 49 Victory Boulevard, invites passersby to peer into the subway tunnel that never made its way to them. 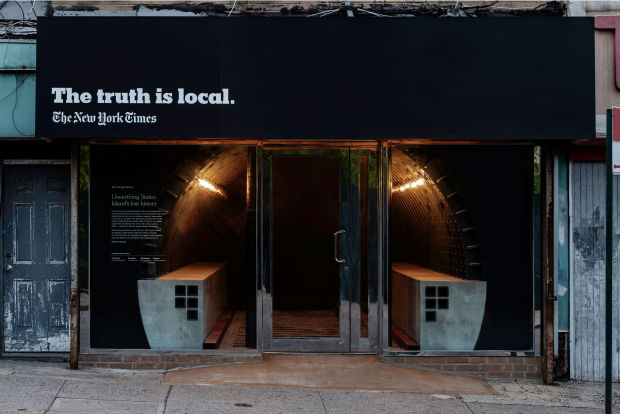 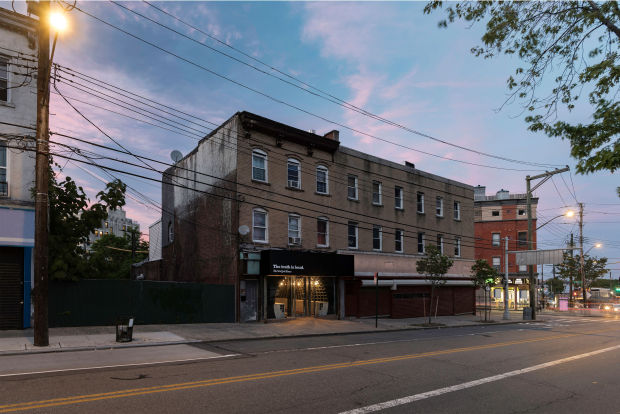 Visitors to all the installations can immerse themselves in the stories by using their phones to scan a QR code to access audio clips featuring the journalists’ reporting journeys.
Experience The Times’s Journalistic Process: The television ad, which will air on linear, streaming and online, highlights Emma G. Fitzsimmons’s, Brian M. Rosenthal’s and Michael LaForgia’s reporting on the M.T.A. that revealed how city and state officials consistently steered money away from the overburdened and aging system, even as its needs grew.
Understand the “Times” in Times Square: The Times will take over a billboard in the neighborhood that was named after it. The billboard, erected on the building that served as The Times’s headquarters for 94 years at 229 West 43rd Street, will read, “The Truth Is Local. The Truth Is Worth It.”
Represent Their Hometown News Source: The Times Store is celebrating its fact-based journalism and paying tribute to the city itself with its Local Edition Collection. The products, which were created with local suppliers and retrace the city’s rich history, include T-shirts, tote bags, hats and buttons.
Support Local Journalism: Throughout the week of June 10, a special section featuring a guide to summer in the city will be handed out nearby the storefront installations including a special $2-a-week home delivery offer for new subscribers.
Learn more by visiting here.
view more - Creative