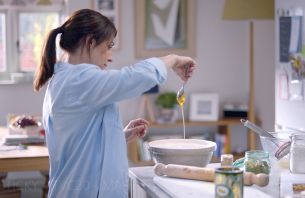 One of Britain's most iconic brands, Lyle’s Golden Syrup, has announced a new integrated campaign from iris with a support package of £1.8m.

Lyle’s will return to TV screens for the first time in 25 years with an exciting new campaign, set to air on Monday 31st October 2016. The advertisement brings to life the brand’s new tagline – ‘Sticky But Worth It’.

The 20 second TV ad features a woman getting in a sticky mess with Lyle’s Golden Syrup as she makes classic bakes, including Gingerbread Men, Syrup Sponge and Flapjacks. After clearing up her latest baking mess, we see her on a video call with her daughter whilst tucking into a golden flapjack. The ad highlights Lyle’s Golden Syrup’s role as that glorious ingredient that makes you and your kitchen sticky, but your food taste delicious.

In a big step on from Lyle’s Golden Syrup’s iconic ‘Sticky’ TV ad, on-air 25 years earlier in 1991, the refreshed creative takes the brand firmly into the 21st century, whilst retaining the same authentic Lyle’s Golden Syrup charm loved by generations.

The new campaign will run across TV, VOD, digital and social media. Press advertising, in-store and PR complete the package.

In addition to the new ad campaign, Lyle’s has signed a new deal with Channel 4. From the first weekend of November, a series of idents will air on weekend mornings. Coupled with the TV advertising schedule, these are set to be seen by over 75% of primary household shoppers with kids. The partnership with Channel 4 will see a breakfast feature in each ident and gives Lyle’s the perfect opportunity to introduce even more UK families to the brand and promote its messaging.

Tamas Fuzer, European Marketing Director at T&L Sugars Limited, comments: “We are really excited about our new ‘Sticky But Worth It’ campaign, which we think is both brave and playful. We know that consumers have fond memories of Lyle’s Golden Syrup and we’re confident it will reignite their love for the brand”.

“Lyle’s currently has the world’s oldest unchanged packaging – with the product remaining the same in a 21st century kitchen cupboard, as it was in a 19th century larder. We’ve capitalised on this rich heritage, turning Lyle’s Golden Syrup into a true ‘Participation Brand’. Going to market for the first time in 25 years with TV will reclaim lapsed customers and invite a new generations of audience to experience the different occasions and versatility of Lyle’s ,” he concludes.