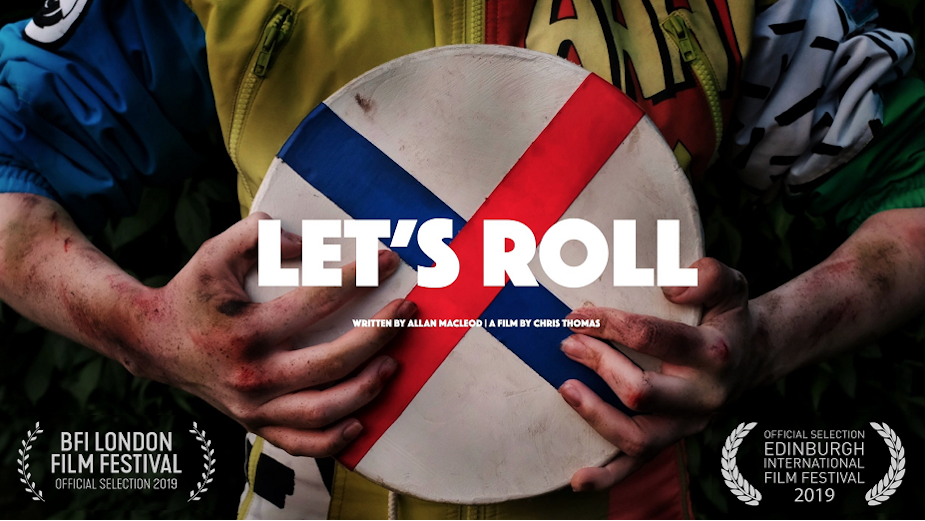 Since 1826, the people of Brockworth have staged an eccentric race like no other. Every year, hundreds of competitors climb to the top of Cooper’s Hill to chase a round of cheese all the way down the treacherous slope for the ultimate prize – a Double Gloucester cheese.
Such an eccentric tradition was the inspiration for director Chris Thomas’ new short film, Let’s Roll. The 23-minute short, which premiered at the Edinburgh International Film Festival, follows teenager Antonia who defies her mother by training in secret to take part in the race. Her brother, who has now left the village to become a soldier, was a local hero for his performance in the Cheese-Roll, but Antonia doesn’t have the same support. Together with her friend Nigel, she embarks on a dangerous mission to follow in his footsteps.
Chris reunited with CHEAT colourist Vlad Barin for the documentary-esque dramedy. The duo has collaborated multiple times before, from commercials and music videos to Chris’ award-winning 2018 short Land of Steel. For Let’s Roll, the pair teamed up to craft an eclectic film that celebrates off-beat subcultures, unpacks a mother-daughter dynamic, and takes a closer look at small-town life. Recently, the film was part of the 2019 BFI London Film Festival’s Official Selection and in light of this year’s Cheese Roll being cancelled, the team 'wanted to celebrate the spirit of the cheese' in what’s usually the build-up to Brockworth’s finest hour by releasing the film online.
Here, Chris and Vlad discuss how they overcame the ever-changing British weather with a striking grade, took inspiration from Son of Rambo, and found playfulness and humour within an unassuming village in Gloucester.

Q> Chris, what inspired you to direct this piece? Did you have any interest in cheese rolling before this?
Chris Thomas> I’ve always had an interest in the quirky and peculiar – stories wrapped within off-beat subcultures or just the plain weird and wonderful. Cheese Rolling had been on my radar for a while and back in 2015 I decided to participate in one of the rolls. Most people see the Cheese Roll as a crazy British tradition – which it totally is – but for the local people of Brockworth it’s a real identity of the area and something they’re deeply proud of. This is what drew me to making a film about it in the first place.

Q> Is there a specific way you wanted the film to look? Did either of you have a particular aesthetic in mind?
Chris> Myself and my brother Lee Thomas (DOP) explored and talked a lot about the tone of Let’s Roll prior to filming. With the film being a dramedy, it was about finding an aesthetic that both lent itself to the comedy and drama of the story and finding playfulness and humour within quite an isolated suburban area that perhaps is not commonly captured in this way. Some points of reference were films such as Hunt for the Wilderpeople, Son of Rambo, and Hot Fuzz.

Vlad Barin> To give you a straight answer, Chris basically just told me to make it look good! I got the film ingested quite early and we had a bit of time to explore the film’s palette. I started working on a few scenes to have a feel of the footage and how it would sit as a whole. I definitely had to be wary of the ever-changing British weather! Chris came in for a half-day session and we mostly discussed the saturation, how to show the progression of time, embrace the weather, and give particular scenes a nice moody feel.
I wanted to keep the grade in tone with the dramady-doc nature of the film. I also didn’t want to push it too much nor did I want it to feel like it was taking place in a particular year. It’s a sweet story about young teenagers and I wanted to emphasise that through warm tones and saturation – a bold summery look that stayed in line with the passion of Antonia. I also tried to create a bit of tension in the scenes with the mother by having the interiors of the house more neutral, pushing the shadows a bit deeper where possible. It was important to stay true to the documentary nature as well, so that if anyone who actually did the cheese roll saw it, they’d immediately recognise the place they know so well.

Q> You’ve worked together before. What was it like reuniting?
Chris> Terrible.
Vlad is great to work with. He brings a lot to the table and really tries to gain an in-depth understanding of what it is I want from the grade. He can really adapt his style depending on the project and get the best out of the story. Vlad kindly put in a lot of time to make Let’s Roll the best it can be, and for that I’m deeply grateful. Vlad’s obliged to say nice things about me now…
Vlad> It’s always a pleasure working with Chris. We’ve probably done around 8 projects together. We certainly have similar tastes for images and he always brings me great films no matter if they’re commercials, music videos, or films. If you haven’t yet, you need to check out Chris’ film Land of Steel – it’s where it all started.
Land of Steel follows a 70-year-old retired worker and lifelong resident of Port Talbot as he runs familiar paths, contemplating the shadows of uncertainty as the future of Welsh steel hangs in a precarious balance.
Q> Finally, did you learn anything interesting while working with actual cheese rollers?
Chris> It’s amazing how far people go in chasing a cheese down a hill.
view more - LBB Film Club