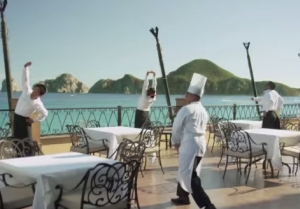 Believe Media director Jeffrey Darling welcomes you to the “Unstoppable” Los Cabos in this recent broadcast spot for the Mexico Tourism Board out of agency Lapiz Leo Burnett. The resiliency of Los Cabos is depicted in this taste of the holiday life, letting travelers know that the disaster-hit destination has already been restored since Hurricane Odile swept through the Baja California region in September 2014.

In “Unstoppable,” a serene stillness descends upon paradise as the stalwart staff of a resort prepare for the tourist season. Darling gives us a cinematic glimpse into the lives of real-life Cabo locals, as the hotel personnel, golf caddies, deckhands, and even an airport ground controller are shown stretching at the beginning of a workday.  The vibrant and unrelenting spirit of the people of Cabo is illustrated beautifully, as they warm up to literally welcome visitors with open arms.

Jeffrey Darling is one of the world’s most successful and sought-after commercial directors. He is renowned for crafting immersive and poetic visual stories, a skill that translates seamlessly into the genre of tourism advertising.

Darling has won over 40 major awards internationally, with his work for Jaguar and Boeing displayed in the permanent collection of the Museum of Modern Art in New York. He continues to direct major global campaigns for prestigious brands such as Louis Vuitton Moet Hennessy (LVMH), BMW, Qantas, American Express, Maybelline, and Coca-Cola, to name just a few.