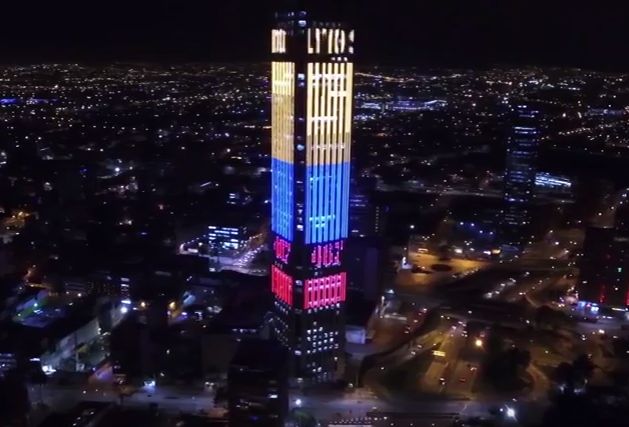 The #AmarilloAzulyYo (#YellowBlueAndI) campaign from McCann Colombia was launched in October 2016 to coincide with the peace agreement signed by the Government of Colombia and the guerrilla group FARC. Because the country was coming together as a nation, the ad agency used the colours of the national flag to bring Colombia’s citizens together around an important cause, that affects all of its citizens: blood donations.

Colombia’s red stripe in the national flag symbolises the bloodshed in all battles fought by the nation, and the #AmarilloAzulyYo campaign, sponsored by Marca País, used the colours of the flag to remind everyone that blood can save lives.

The #AmarilloAzulyYo campaign lit up Colpatria, the highest tower of Bogotá’s financial district, eliminating the red stripe and asking Colombians to help refill the red colour of their national flag with their collective donations of life-saving blood. As donations mounted, the colourless stripe slowly filled with red light.

The campaign gained support across social media, the press and among media influencers, helping to drive volunteers to 15 different Colombian cities with blood donation centres organised by the Red Cross. Blood bags were created just for the effort; the bags were designed with the blue and yellow colours and a colourless stripe that turned red as the volunteer gave blood.

The campaign reached more than 27 million people across social media channels and earned media. Within 72 hours of campaign launch, the blood donation rate rose 14%. In total, more than six thousand patients received blood from the campaign.