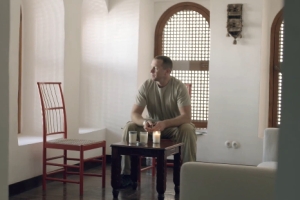 Every year, thousands of American soldiers miss out on countless family moments while they are serving abroad. This year, Air Wick has found a way to overcome the distance in a unique way by using the power of scent - documenting one family capturing the air in their home and sending it abroad to their loved one.

Air Wick chose The Fellers, a military family of eight, currently living outside their army base in Raleigh, North Carolina. Air Wick was so inspired by their family story, because their separation by distance over the holidays is so relatable. For the past 11 months, Kearen Feller, father, husband and devoted American soldier, has been stationed in Qatar Air Force Base serving our country.

Throughout his deployments, he’s missed countless birthdays, holidays, and lots of firsts - including his youngest’s first day of preschool and his oldest child’s first day of high school. Cortney Feller, his wife and rock of 12 years, has been taking care of their six kids alone, managing the everyday struggles that come along with being a commander’s wife.

The film shows how Air Wick literally captured the scent of the Feller’s home – from the broken-in baseball passed on through generations, to a crackling, cozy family fire where the family enjoys sleepovers, to a fresh baked family recipe of apple pie – all these treasures to create a custom Feller family candle collection that they surprised Kearen with in Qatar to remind him a little more of home.

Like most families who cannot be together due to work or deployment, it’s the familiar objects of home that remind Kearen of his family. Air Wick was proud to play a part in bringing a family closer together by showing the role scent plays in triggering those homey memories.