How BBDO Germany Made Noise Visible in its Soundlounge Poster Campaign 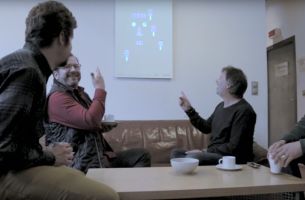 The Regielounge (Director Lounge) is a stalwart event in the German ad calendar. Hosted by BBDO Germany’s Chief Production Officer, Steffen Gentis, the event attracts ad folk from all across the country and others from further afield with its line-up of filmmakers which have in the past included Wim Wenders, Rankin and Keith Schofield. But at the backend of this summer, the crew behind Regielounge launched Soundlounge, an event of a similar nature with the aim of bringing together folk from the sound and ad industries. To build hype around the event, BBDO placed poster ads in various sound and music studios around Germany - but not any old posters, interactive posters that react in certain ways to certain sounds and volumes to give viewers a unique invitation to the event. The campaign was created by BBDO Group agencies BBDO Düsseldorf, Proximity Worldwide and CraftWork, along with IT experts IOX Lab.

LBB> Was the plan to always do something technologically innovative for the Soundlounge promotion? Or was it more of an extension of an initial plan to do a poster campaign?

WS> We wanted a poster that reflected the acoustic nature of the event, but we also needed to get the ad and music industry's attention in a very short space of time, as our event was just after school holidays. To do that we needed a poster that reached out beyond the hanging space on the walls of audio production studios - we needed an idea that would digitally reach out in the industry trade press.

So we started researching technology that could deliver audio interactivity to a print poster – something we felt would get the attention needed to make it into the trade press and hopefully social media too.

LBB> Did the project go through many iterations before you landed on this idea?

WS> The idea to have something that would engage people acoustically was our starting point. Figuring out and refining how to make a print poster do this was a scrum process in three design and rapid prototyping sprints that took almost half a year to complete.

LBB> Who did you work with on the technological side of things?

WS> Design and technology worked hand in hand - and once our design team in Düsseldorf had defined the parameters, we quickly identified IOX labs as the right partners.

LBB> Talk us through how it works - does the poster give different images dependent on the volume / type of sound? What kind of images does it show?

WS> The starting point is a plain white paper poster, empty except for the word Düsseldorf in the middle and the sponsors’ logos along the bottom edge.

The poster is coded to respond to the slightest noise, randomly revealing different icons and patterns. Increasing the loudness and duration of noise reveals more and more information. We found that printing any explanation was superfluous – with the responsiveness coded in, the poster’s operation and the user’s experience was completely intuitive. People instantly understood that they needed to make a noise to reveal the massage and to get the whole message, be louder, louder and really loud – an interesting interaction in that everyone responded quite individually, and you could always hear whenever someone was ‘looking’ at the poster.

LBB> Can you see this technology being used in further campaigns for other brands? How can you see it evolving?

WS> The idea of mixing traditional media with innovative technology is in no way new, but we do see an increase in this innovative mix as complex technology becomes increasingly democratised and accessible. The hologram in the Bombay Sapphire Bottle and the 360 Becks Cap Cam that we also recently saw coming out of the BBDO Düsseldorf office illustrate this well. New posters are currently in design for other clients, and we are reapplying the programming and technology to other outdoor media.

LBB> The posters were placed in music and sound houses throughout Germany - how did you promote the work further? Was it quite organic via social media?

WS> The response was greater than we could have hoped for – we were headline news in the entire ad industry trade press, and campaign of the day in two of the major leading magazines on the day of our launch.

The posters were hanging at the audio production houses, who also posted a number of very funny films on their social media channels of their people playing and interacting with the posters.

All of this combined got everybody talking about the poster and, of course, our event. Registration for the first Soundlounge went up from 80 interested people to over 700 attendees in just four days.

WS> Looking back, the programming was complex, as was calculating the micro-projection throw ratio to match the design needs. But the biggest challenge lay in creating a robust environment for the complex projections behind the basic instability of the paper, especially in that DIN A1 size.