Behind the Work 361 Add to collection 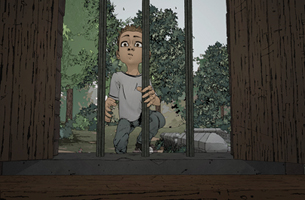 At this year’s Comic Con, Firstborn teamed up with Amazon’s Audible to celebrate the release of the audio version of graphic novel series Locke & Key, written by suspense novelist Joe Hill. Fans could step into Hill’s spooky world thanks to a fully CG virtual reality experience that matched the novel’s artwork by Gabriel Rodriguez and featured some of the audiobook’s cast of voices, including Haley Joel Osment (“The Sixth Sense”), Tatiana Maslany (“Orphan Black”), and special appearances by Hill, Rodriguez, Kate Mulgrew (“Orange is the New Black”) and more. In the spirit of Halloween and all things spooky, LBB’s Addison Capper chatted with Audible SVP, Global Brand Marketing Barbara Ward Thall, and Firstborn VP, Content Development Seth Tabor and Sr. 3D Artist Ron White, to find out how they brought it to life.

LBB> For our readers who don’t know much about it, can you tell us a bit about Locke & Key the series?

BWT> Locke & Key is a best-selling, award-winning comic graphic novel series written by acclaimed suspense novelist Joe Hill and illustrated by Gabriel Rodriguez. In the series, a brutal and tragic event drives the Locke family from their home in California to the relative safety of their ancestral estate in Lovecraft, Massachusetts, an old house with powerful keys and fantastic doors that transform all who dare to walk through them. As siblings Tyler, Kinsey, and Bode Locke discover the secrets of the old house, they also find that it’s home to a hate-filled and relentless creature that won’t rest until it forces open the most terrible door of them all! The heart-stopping impact of Rodriguez’s astounding artwork propels the graphic novel forward, and in our audio interpretation of this powerful story, the illustrations are brought to life with an impressive cast, elaborate sound-design, and an original score. The result is an extremely immersive and delightfully terrifying, unforgettable listening experience.

LBB> Locke & Key VR puts the viewer in third person - why was that decision made? How did it add to the overall spookiness and mystery of the film?

ST> We wanted to plant the viewer right in the middle of this iconic scene, but remove them from directly interacting with the environment so we could control the timing and their attention, creating a more crafted experience. With this control, we were able to more purposefully build toward the thrilling climax of the scene when Dodge is revealed. 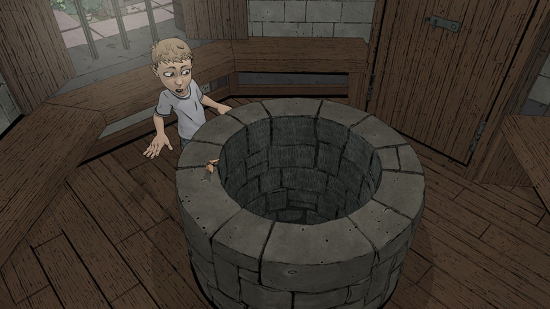 LBB> Sound and music is a huge part of instilling fear into a film viewer. Sound is also hugely important within 360-degree film. How tricky was it to instil that spooky sound into the whole experience and ensure that viewers were hit from all angles?

ST> Sound is extremely important when working with 360-degree videos. The audio needs to not only compliment the content, but also guide the user and heighten the sensation. We were able to build on Audible’s incredible voice talent and original score by using binaural audio and then incorporated additional sound effects to intensify the character reveal.

LBB> And with regards to the experience’s actual content - what techniques did you use to keep the mystery up? Was it a matter of leaving lots of open, spooky space or using more pointers?

RW> The existing visual aesthetic of the series that we were matching already has a mysterious, supernatural style. Timing and spatial relationship then proved to be the most powerful tools used in creating an enjoyable and eerie experience.  Giving enough breathing room for the user to absorb the atmosphere is critical, as well as creating an interesting enough space for them to explore. We then infused visual and audio queues to layer the experience.

LBB> I really love the animation - which is matched to Gabriel Rodriguez’s artwork for the novel. How did you ensure that you paid dividends and respect to the original artwork?

RW> We knew that if fans sensed a shred of inauthenticity, they would immediately reject the experience. As a result, we immersed ourselves in the artwork so we could really do it justice. Once we got to a point where we knew it felt like the world of Locke and Key, we were then able to add our touch to realise the visuals in their new 3D home.

LBB> Were there any graphic novel fans in the team working on it? Were they totally geeking out?

ST> We definitely had a few team members that were already fans of the work and could not wait to bring this project to life. By the end, the entire team had binge-read the whole series, and we were all geeking out.

LBB> The experience is fully CG - what are the benefits and added difficulties when working with VR in this way?

ST> The clearest benefit is that you do not have to worry about hiding your crew, which is an issue when filming live-action in a 360-degree world. With CG, you are building a controlled environment so there are not the same limits. Being completely 3D, the project allowed us to prototype camera and spatial relationships rapidly, which was critical when it came to creating the look and feel we wanted to achieve. We were also able to take advantage of stereo technology, whereas in the past that was more difficult to achieve.

RW> The trickiest part of creating this experience was making it feel believable and really capturing the eerie atmosphere of the Locke and Key universe. When working with VR it can also sometimes be a challenge to control the viewer’s attention. For this project, it was a fun task to see what we could do to guide the viewer through the experience by incorporating visual elements like the butterfly so we can play with their eyeline and showcase the whole environment.

LBB> Attendees could share split-screen clips from within the headset of their view within the Oculus and their own reaction to what they were seeing. That’s pretty neat and something I’ve not seen used in VR before - I’m always fascinated by people’s faces when they have a headset on! Is that logistically tricky to set up? Will we see more of it?

ST> It’s important when working with VR that you try to see beyond the goggles to deliver the experience to an even larger audience, whether that is through YouTube 360 or our social share-out feature, which we have incorporated into other past VR experiences we’ve created. For the social share-out feature, our dev team wrote custom-code to be able to process side-by-side videos quickly so we could upload them with viewer permission to a YouTube channel that they can then share out further.

LBB> How did the Comic Con crowd take to it?

BWT> The VR experience was a huge hit at New York Comic Con! From the minute that the doors opened on Thursday morning to the second they closed on Sunday evening, crowds were lined up at the Audible booth to put on their Oculus Rift Goggles and jump into the story. Because of the 360-degree nature of the visual and audio experience, we had people coming back four or five times to make sure that they didn’t miss a single element. We had nearly half of those who did the VR experience share their reactions on social media, and even more participants tell us how much they enjoyed having the audio drama’s thrilling narration and sound design paired with the graphic novel’s amazing artwork.