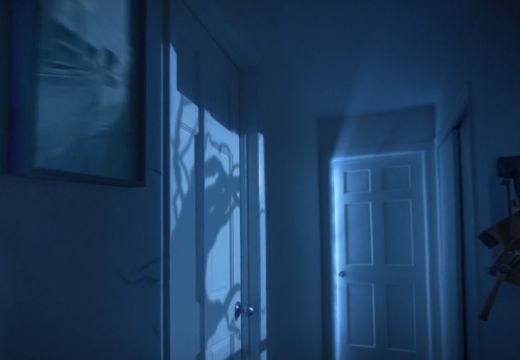 A long day’s work followed by a bad night’s sleep can be a nightmare. MassMarket collaborated with Grey and Smuggler’s Todd Field to solve this problem in “Construction Worker,” the newest spot for Advil PM.

“The idea was to make it immediately apparent that something haunted was threatening the hero,” commented MassMarket On-set Supervisor Tom Leckie.

MassMarket perfected the spot’s timeline in previz and worked closely on set with Smuggler Director Todd Field to get exactly what was needed in camera.

“Keeping in mind that the final spot was to be one continuous pass, include variable speeds, morphing and warping, we shot this in three separate moves,” noted Leckie. “We completed a full digital transition from the stairs to the corner of the wall, from the painting on the wall to the doorway, and then from the bedroom doorway, over the bed, out the window and into the sky.”

Back at the MassMarket studio, the team carefully stitched the live action plates together to create one, seamless journey.

“Once we nailed down the camera’s path, we removed all the tracking markers and cleaned up the shots before diving into the CG,” added Leckie.