“Going To The Movies Is A Celebration of Storytelling”: Why Grant de Sousa Opened His Own Drive-In Cinema

A trip to the movies, the Great Guns director argues, is a magical experience worth preserving. At a time of rising uncertainty for theatres across the world, Grant de Sousa tells LBB why he’s opened up a brand new cinema 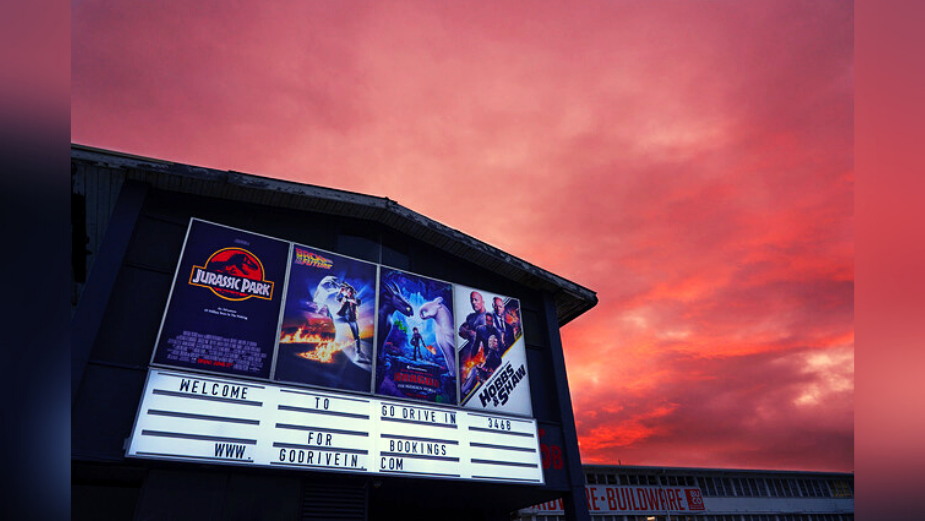 When the world was plunged into lockdown a year ago, millions turned to new hobbies and projects to keep themselves occupied. Whilst most of us settled with banana bread and Zoom quizzes, however, Great Guns director Grant de Sousa had his sights set on something a little bigger - starting up his own drive-in cinema.

Until last year, owning his own cinema was somewhat of a pipe dream for Grant, who saw it as a potential ‘retirement plan’ much later down the line. But opportunity soon came knocking. After initially planning a pop-up cinematic fundraiser to raise money for cloth masks, Grant was approached by an old friend who convinced him to create a more permanent space. One abandoned service station and a lot of hard work later, Cape Town’s GoDriveIn opened its doors in October last year. Roadhouse and car wash by day and cinema by night, audiences are treated to a selection of cult favourites, family flicks, and classic blockbusters - a safe haven for film fans whilst the pandemic continues to impact traditional movie theatres.

Here, we speak to Grant about his cinematic venture, reflecting on how the project evolved from his original vision, his hopes for the future, and why we can’t afford to lose the magic of movie theatres after the pandemic.

Q> Going right back, where did this dream first originate? When did you realise you wanted to open up a cinema?

Grant de Sousa> I’m not 100% sure it was ever a serious dream, as I never saw it as a genuine option. I just wanted to make films. I think in my mind maybe one day when I ‘retired’ it would have been an interesting option.

But this pandemic presented the opportunity to my partner and I - and we took it with both hands! We just knew this would be an important idea as people genuinely needed an outlet.

Q> What are your memories of going to the cinema as a kid? Do any fond ones stick out?

Grant> Haha, there are so many. One of my earliest memories is going to see the original RoboCop at the cinema and the kid I went with was so squeamish he didn’t even get through the first twenty minutes. It was then I knew for sure something wasn’t right with me! I also remember seeing Braveheart ten times with another friend of mine in the space of just over two weeks. The usher knew us by name, at that point. 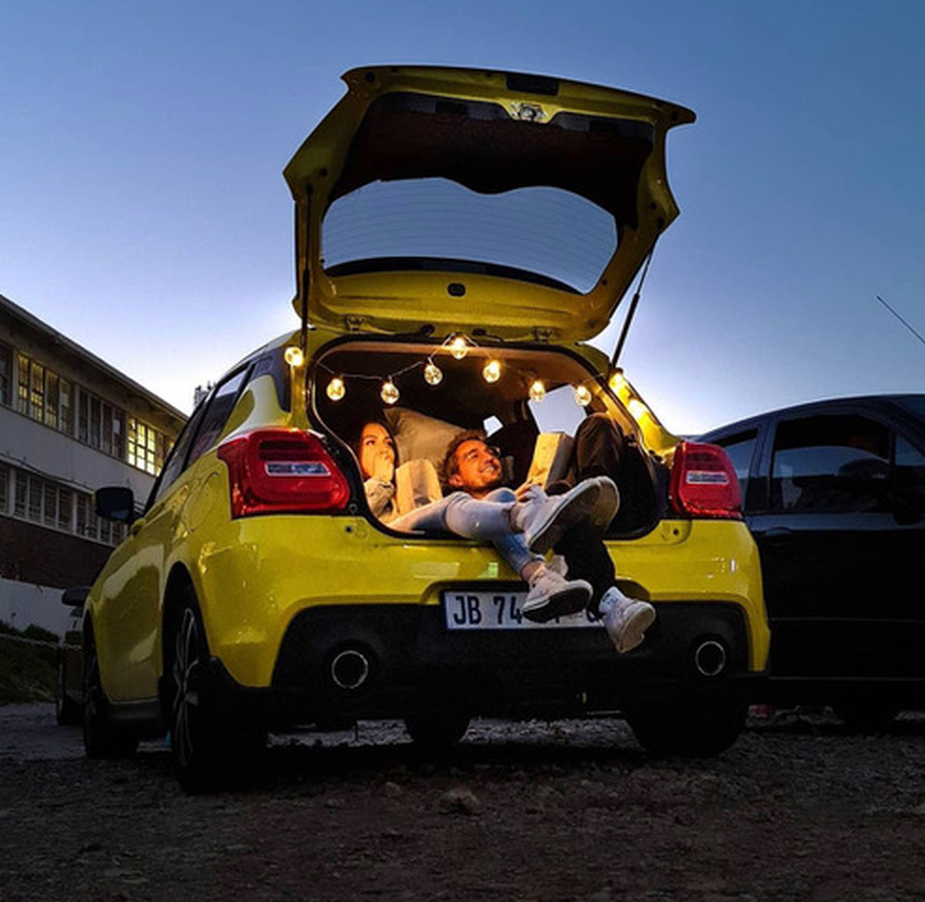 Above: Taking in a movie at GoDriveIn.

Q> Looking at GoDriveIn now, how close is it to your original vision?

Grant> Well originally we were going to do this just as a pop-up fundraiser to raise money for cloth masks - as we had then just set up a NPC doing all sorts of things. An old friend of mine heard what we were doing and convinced us to create a more permanent space. He works for a massive development company that owned an old service station in Salt River that had been abandoned for close to ten years and was basically a dump. The space was meant to have been developed pre-Covid but the pandemic had halted any plans.

We then went on this insane journey of activating the space into what it is now - a roadhouse with seven food trucks and a carwash during the week, and a drive-in cinema at night on weekends. So yeah, I’d say it’s quite different to what we were first looking at!

Q> And in what ways are you hoping GoDriveIn might evolve into the future?

Grant> To be honest, I’m not 100% certain. It’s such an unprecedented time and it’s very hard to plan too far into the future, so we’re kinda taking things one day at a time. We are currently pushing the roadhouse aspect a lot more - and there’s a chance we might open a second one in Johannesburg. So we’ll see where that goes.

Q> If you could change one thing about the whole process, would you? If so, what would it be

Grant> I’d have to say probably the licensing. It’s such a complex landscape. We are only allowed to show older films - which we’ve embraced - but a blockbuster here and there would really help. The studios have some global exclusive agreement with traditional cinemas and won’t allow drive-ins to show the latest films. 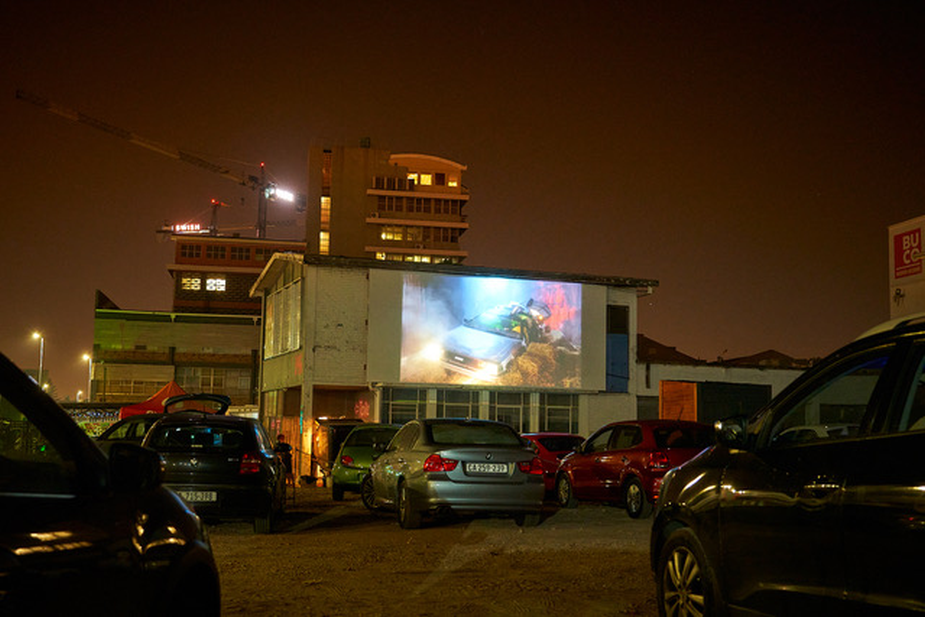 Above: A regular scene at GoDriveIn

Q> We're living through something of a troubling time for cinemas with the pandemic and streaming services posing a huge challenge. Why is it so important that cinemas find a way to survive these times?

Grant> The cinema experience is such a vital cog in the wheel. It would destroy me if it dies. I genuinely don’t understand how it could - it’s such a unique and special way to watch a film. Being a cinephile and a person that, pre-Covid, was going to the cinemas two or three times a week, I can testify to that.

I find that the landscape of the streaming world feels a bit like fast food. Just consume, consume, consume without regard or appreciation. Going to the movies is a celebration of storytelling. You make the conscious decision to take a few hours out, park your car, order snacks, meet a friend, and actually discuss the film. You don’t just consume it and instead compare resumes of who has seen what and what you should still see. It’s also the best way to watch these films - unless you’re wealthy and have a proper set-up yourself. And even then, half of these people haven’t even set it up correctly! When cinemas reopen, support them. It’s so important.

Above: A gallery of images from GoDriveIn Cinema

Q> How do you think cinemas can find a way to ensure they do survive? Is there anything cinemas should be doing to reinvent the moviegoing experience?

Grant> Well, one thing they do here is over-inflate the snack prices. That needs to change. It’s a common complaint I see online and it’s an expensive experience as a result. I’m guessing they need to cover their overheads, but surely there must be better ways. Other than that, I think cinemas here are run very well. There’s not much I’d change.

Q> Finally, if (in a post-pandemic future) we at LBB were to fly over to South Africa and visit GoDriveIn, what movie should we see and why?

Grant> Hmmm, well. I’d have to go with Back to the Future. It was the first film we screened and it has such cultural relevance to the drive-in. I’ll even play you my short film beforehand!