Trends and Insight 185 2 Add to collection 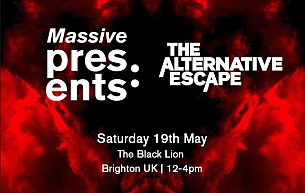 A new collaboration, a new line-up, a new instalment for MassivePresents.

This time, the MassiveMusic live concert platform that partners with innovative brands for an unforgettable music and brand experience is proud to present a stage at The Alternative Escape.

Most of you might know The Great Escape, a three-day music festival held in Brighton and Hove, England every year in May. Well, there’s more to it – and that’s when The Alternative Escape comes into play. The official series of shows will take place alongside the core programme and be held in Brighton on May 18th.

MassiveMusic, the international music agency that helps brands tell their story through sound and music, decided to partner up with the indie sister of The Great Escape for their biggest MassivePresents edition to date.

It all started 12 months ago with 50 people. A few editions later, at the previous event with Native Instruments, 750 people turned up.

The concept is simple yet effective: the (music-related) brand that MassivePresents partners up with gets to showcase their products or services during the night. In the meantime, a killer genre-spanning line-up performs throughout the night, resulting in a hands-on and immersive experience for the audience.

This time, though, there are no products to be shown. Yet, the power of music, as the incredibly unique tool that it is, is more ‘alive’ than ever at a festival such as The Alternative Escape. The name suggests it itself: music as an escape and, even more than that, as an alternative escape thanks to those bands and artists that can’t and don’t want to be labelled. Their music – eclectic, challenging, out-of-the-box, doesn’t fall into a distinct category. And that’s why it’s so special.

On May 19th, from 12pm to 4pm, four artists will rotate and perform their material live from The Alternative Escape stage curated by MassiveMusic. The location? The Black Lion (14 Black Lion Street) in Brighton.

From ALASKALASKA’s blend of jazz, disco, funk and R&B with a playful twist to Fades, a brand new alternative pop trio formed in 2017 and set to release their debut EP this summer. But also, Sonia Stein – an exciting new pop voice, who has just revealed the video for her sultry R&B tinged release ‘One of Those Things’. Last but definitely not least, Maeve – a mysterious singer that will leave a mark on you.

MassiveMusic’s Director of Growth Charles Gadsdon comments: “Not even a year ago I thought – having a stage or a tent at a music festival with a load of awesome bands on all day long? Wouldn’t that be something? Well, a year later here we are. A winning idea, some incredible partnerships, lots of interesting artists and some solid teamwork brought us here at The Alternative Escape. From dream to reality.”

See you down the front? Hit that 'JOIN' button.

Can’t make it this time? Subscribe HERE to keep up to date and join the next MassivePresents nights for FREE.