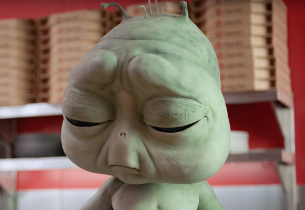 Droga5's new campaign for Pizza Hut introduces a new creative platform, “No One Out Pizzas the Hut”, with a series of TV and radio spots which will air nationally and additional social and activation ideas to follow in the near future.

Since 1958, Pizza Hut was the first to serve best-in-class pizza to the White House, the first pie in space and the first to introduce that stuffed crust we all know and undeniably love (and wait ‘til you see what they’ve done with that crust now).

Despite becoming the iconic American brand every pizza lover recognises, Pizza Hut has never lost sight of its midwestern roots of being the humble brand that it is. Tooting its own horn is just not in its nature.

The new campaign introduces this unexpected cast of memorable characters, speaking from their own personal experiences to brag on behalf of Pizza Hut and explain to the world just why No One Out Pizzas the Hut. In the TV spots, a homesick alien and a guy who faced a near death experience might be wildly different from each other, but they share an unwavering love for Pizza Hut we can all relate to.

The Bragspeople make your mouth water with Pizza Hut’s new grilled cheese stuffed crust pizza (told you they’ve out Pizza’d), with further spots will add into the rotation in the coming weeks.
view more - Creative