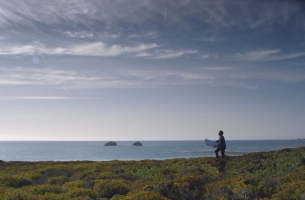 The campaign also includes six 30 second that highlight the separate vignettes in the anthem spot, ranging from an architect flying from San Francisco to Santa Barbara on a whim to compare blueprints in person to a Los Angeles executive escaping the city bustle for a tranquil evening of wine tasting in Napa after a day in the office. The campaign will be released in stages, with the 60 second anthem and two 30 second launched online this week and on broadcast in early November. The remainder of the campaign will roll out in 2016.

Surf Air tapped Miniac Films to elevate their first campaign, steering away from the “explainer videos” that are all too common for tech startups and instead focusing on an aspirational perspective for the luxury brand. Rather than honing in on the comforts and luxuries of the flying experience itself, the films focus on the essential lifestyle benefits for Surf Air’s target subscribers: freedom to spend their nonworking hours in whatever way they choose. Pina worked closely with Surf Air acting Creative Director Liam Fayed throughout the entire process to craft a compelling video campaign that vividly exhibits the diverse topography and cultural experiences that California has to offer in only a short flight’s distance.

Notes Fayed, “Miniac was really eager to bring a storytelling aspect to our debut campaign and were meticulous about getting the most out of each and every shot. Working in such a trusting creative collaboration really allowed everyone to work as a team to elevate this campaign to visualize unlocking the wealth of experiences California has to offer.”

Adds Miniac Films Executive Producer Stephen Roesler, “Surf Air is unique because they are a young company that understands the importance of telling their story through film. Startups often value a conservative and scrappy marketing approach, but when they produce content with high production value, they differentiate themselves with a unique brand story in a space that is typically credited for metrics. We love that Surf Air sees the need for both.”