Droga5 Rattles the Vote With Adorable New Campaign for The Y 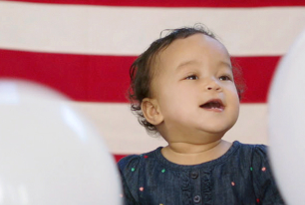 Back in February, in the midst of what has become the wildest election in history, the Y launched “Zoe For President” as part of its first national campaign.

Zoe is an adorable one-year old girl, running for office… in 2064. She represents the potential the Y sees in every child to one day become president if they’re nurtured properly and given the right opportunities—opportunities the Y provides every day, like early learning, mentorship, healthy meals and more.

In phase two of Zoe’s campaign, she’s doing everything she can to “Rattle the Vote” (i.e. encourage people to get to the polls). 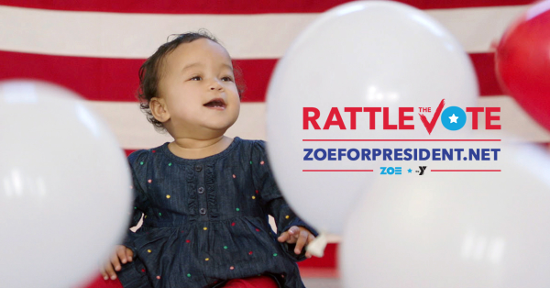 To start, Zoe will help people get their friends and family members to the voting booths by lending her babbling voice and adorable looks to the cause. On ZoeForPresident.net, people can create customised videos of Zoe encouraging their undecided or disillusioned friends to get out and exercise their civic duty. The videos can be shared on social media to further spread the news.

Additionally, the Y is helping “Rattle the Vote” by providing little Zoes nationwide with a safe place to play on Election Day. Introducing “Zoe’s Kids Day Out,” an initiative making it easier for busy parents and caregivers to get to the polls on Tuesday, November 8. Acknowledging taking kids to the polls may add stress for busy parents and caregivers, the Y is committed to doing its part to make sure all Americans can vote. 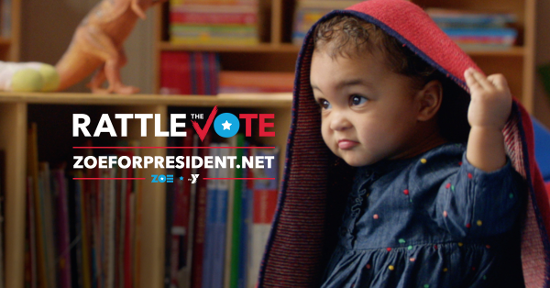 Ys around the country are participating in Zoe’s Kids Day Out initiative. Services vary in each community. To learn what services are available locally on Election Day and their cost, visit YMCA.net for local Y contact information.

Zoe is doing everything she can to help get more people voting, because voting makes our country better, a goal the Y works to achieve every day. Click here to visit the Zoe For President website.