Droga5 NY & Under Armour Challenge You to 'Slay Your Next Giant' 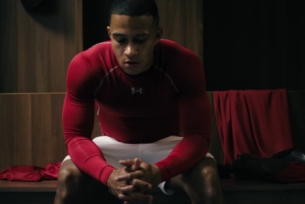 Droga5 New York has launched its latest work for Under Armour - this time in the football division.

Titled “Slay Your Next Giant,” it is Under Armour's first global football campaign. This campaign’s digital story features Memphis Depay of Manchester United, Cameron Carter-Vickers of the Tottenham Hotspur Academy, as well as young up-and-coming players from Brazil, Chile, Mexico, and the UK, who are developing their talent on grass pitches, cement courts, and empty lots all over the world. Each player’s story is united by the final phrase “You’re just getting started,” which speaks to the ethos of the brand’s global football category as a whole. View the campaign website at http://slayyournextgiant.com/.

A unique element of the campaign is the focus on players’ laces – the item that completes an athlete’s ritual before heading into battle. As a call-to-action, UA has armed its football athletes with customized laces engraved with a personal goal, each pair representing a new giant to slay. As players reach each milestone, they will symbolically remove their laces and replace them with a new pair, sharing their journey to greatness on social media channels along the way. Players have been teasing the campaign by posting their laces on their social channels since the beginning of the season, providing an up-close look at the challenges they face and the goals they set for themselves. These additional social story lines feature athletes like Jermaine Jones of the MLS’ New England Revolution, Oswaldo Alanis and Jesus Corona of the Mexican National Team, and Gonzalo Fierro of Colo-Colo in Chile, making this a truly international activation.