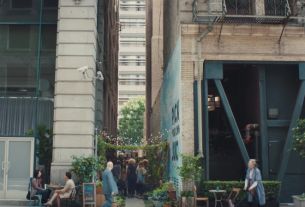 The points you can accrue from your Chase Ink card can really help your business. But some businesses aren’t aware they have earned points or how to use their points, such as to buy things on Amazon, buy vouchers, meals and more. Chase needed to show people points can also be useful when invested back into your business.

Enter the latest campaign from Chase. Created in partnership with Droga5, the new campaign titled “Power of Points” demonstrates highlights how business owners can use points accrued from Chase Ink cards to help their businesses.

At the heart of the campaign are two spots featuring two business owners. Each film documents how each owner used 60,000 points (the same as the sign up bonus when you get the card) in unique ways to benefit their business. The first spot, “Filthy Rich” follows Rich Mendoza, of Filthy Rich Barbershop as he creates a giant topiary mustache for the front of his shop, in order to get more people to notice him. The second spot, “Squeezed,” follows David and Emily Ojobaro, owners of Squeezed Online, an online cold press juice company. They used their 60,000 points to get their juice out on the street, by creating a pop up, pick your own juice bar in the middle of the city.

Justin Ruben, Group Creative Director, Droga5, said: “We wanted to demonstrate to small business owners that by investing points from the Chase Ink card back into their business, they can became a very powerful business tool. In the initial phase of the campaign, we have chosen to highlight two entrepreneurial businesses who have combined their reward points with a good idea, to create something beneficial for their business.”