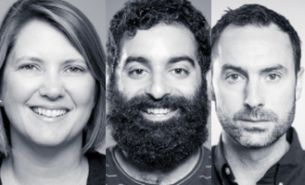 Ross Plummer joins Droga5 after spending eight years at Wieden+Kennedy, where he was hired in 2006 as a Producer for the agency’s Amsterdam office. While at Wieden+Kennedy Amsterdam, Plummer produced iconic, global campaigns for Coca­Cola, EA, ESPN, Intel, Heineken and Nike. After being transferred to Wieden+Kennedy Portland, Plummer spearheaded production for Nike Global Football/Soccer as Senior Integrated Producer. Prior to Wieden+Kennedy, Plummer enjoyed a stint in Dubai working for Warner Bros. on the Oscar-­winning movie Syriana. Additionally, Plummer spent time in England mastering production processes and techniques as a Researcher and Associate Producer on documentaries and factual content for the National Geographic Channel and BBC with production companies in London and Birmingham.

Amanda Revere began her production career at Fallon New York, before moving to Fallon's main office in Minneapolis. She returned to New York in 2011 and was one of the first producers hired at Barton F. Graf 9000. While helping build the production department at Barton F. Graf 9000, she produced award­-winning campaigns for Kayak.com, Ragù and Dish Network. Revere joins Droga5 after a year McCann where she worked on New York Lottery, General Mills, MasterCard, Choice Hotels and Cigna, among others.

Shayan Amir­-Hosseini joins Droga5 from Google Creative Lab where he worked on the Android Experiments Initiative and helped launch the platform website and a variety of Android applications. He also worked on the Tap to Translate feature you find in the Google Translate app. After his time at the Creative Lab, he helped the Google Access and Energy team, working mostly on content for the Google Onhub router that was released late last year. Prior to Google Creative Lab, Amir-­Hosseini worked as a Digital Executive Producer at Saatchi & Saatchi New York and working in the Los Angeles office, as well. During his time at both offices, Amir­-Hosseini worked on a variety of digital initiatives, including Ideas for Good, Toyota/Yahoo Fantasy Football Hall of Fame, 100 Cars for Good, as well as the first ever social vehicle configurator (using Google Hangouts).

Sally­-Ann Dale, Chief Creation Officer, Droga5, said: “As Droga5 continues to grow and deepen our Production capabilities, hiring top talent is critical to business success for our clients, as well as for the agency. Ross, Amanda and Shayan’s considerable talent and extensive expertise will align quite nicely with the momentum we have going. I'm really looking forward to seeing what the future has to offer with them on board.”

Ross Plummer, Executive Broadcast Producer, Droga5, commented: “Droga5’s approach to production is one of a kind. I'm excited to carve out productions that serve the agency and its clients' creative and strategic needs going forward.”

Says Amanda Revere, Executive Broadcast Producer, Droga5: "I am thrilled to be working with the innovative Production team at Droga5 as it develops new capabilities and solutions to better serve its clients’ changing needs.”

Shayan Amir­-Hosseini, Executive Interactive Producer, Droga5, said: “Droga5 is an agency I’ve admired for years, and I am looking forward to adding to its creative pedigree and approach to advertising.”