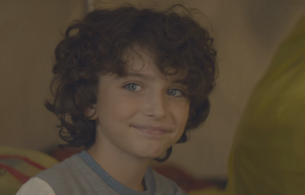 A tiny crusader leaves no charitable stone unturned in Big Block Films director Jonathan Zames' new uplifting spot, “Anthem,” for Glad. In anticipation of the fast approaching holiday season, “Anthem” is part of the “Glad to Give” campaign which aims to inspire and promote charitable giving around the world.

Zames brings to life a boisterous, story-driven spot through inventively cinematic angles, captivating flares and wry humor.  The film opens on a young boy receiving a brand new jersey for his birthday which he curiously proceeds to throw away (into a Glad garbage bag).  What follows is more seemingly bad behaviour as he spends his days and nights sneaking around and cleaning his house out of food, clothes and toys- all of which are stuffed into Glad trash bags and hauled off to his backyard hideaway.

The action rises, driven by Ages and Ages’ indy single “Do The Right thing”, until the boy’s parents have grown fed up and decide to confront him. But things take an unexpected turn as they discover the true nature of his mission;  He’s been collecting for the needy as part of a school donation drive. The final title card “One act of giving inspires another. What are you Glad to Give?” invites us to consider charity as an everyday opportunity, rather than a merely occasional act.

Big Block and ad agency Critical Mass worked together on the spot as part of the greater Glad To Give effort, achored by GladtoGive.com which highlights everyday stories of people giving back to their communities.

“Anthem” was an opportunity that allowed director Jonathan Zames to combine his talents for both comedy and drama and create a unique intersection between the two.  "This is a rare spot where the medium is the message,” Zames said. “The campaign is all about opening your heart and in some way we really wanted to echo that in the viewing experience by having the viewer rush to judgement about the protagonist and then realise they should have been more charitable in their interpretation.”

The campaign is a bulls eye for Big Block Films, an integrated production company specializing in design, animation, visual effects and editorial for the integrated space. Headed by executives Kenny Solomon, Scott Prisand and Caroline Gomez, the company has office in New York and Los Angeles.