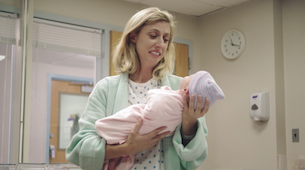 The spot features a new mother being handed her less-than-aptly labelled “bundle of joy,” as the infant delivers ear-piercing wails that shatter any magical moment that she’d envisioned. The woman spots a much more angelical baby in the neighbouring bassinet, and after alarmingly quick contemplation, casually swaps her howling infant for the peaceful newborn. The spot concludes with the super, “Leave the crazy to us.”