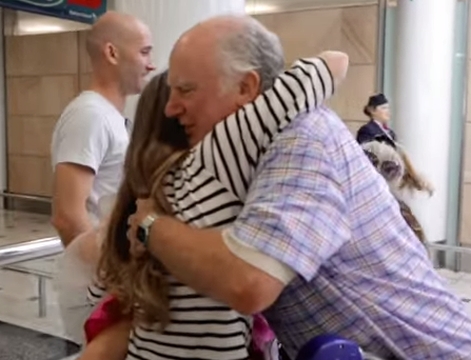 The final video in British Airways and Tourism Australia’s ‘Australia has everything…except you’ series has been launched, encouraging Brits with friends and family Down Under to visit in 2015.

The tear-jerking campaign features a couple from Surrey whose son moved from the UK to Sydney with their grandchildren. The couple, Alec and Catherine Beattie, were surprised at a specially staged event in London in April 2014 with an emotional film featuring their granddaughter Esme.

Esme loves her life in Australia but misses her grandparents terribly and this portrayal led to an emotional reaction at the screening. British Airways presented the couple with complimentary flights to visit Esme, and the final film in the trilogy released this week captures their reunion in Sydney airport earlier this month.

To support the launch of the final video, British Airways and Tourism Australia conducted some research in to popular reunions for 2015. Over 50% of respondents said that the person they would most like to be reunited with in 2015 was a parent (25.9%) or grandparent (24.4%). In third place with 10% of the votes was ‘my first pet’!

British Airways is making reunions with loved ones in Australia in 2015 more achievable for Brits with a special promotional lead in fare of £799 for flights between London and Sydney.

Stephen Humphreys, British Airways’ head of sales and marketing UK&I, said: “We’ve been bringing generations of families together since we started flying to Australia, nearly 80 years ago.

“We know that our flights can be a lifeline to make sure friends and families keep in touch between the UK and Australia. So we were delighted to be able to play our part to ensure Esme and her grandparents had the time of their lives together in Australia.

“Our fantastic fares and daily service between London and Sydney means other families can enjoy their special moments together as well.”

Denise von Wald, Tourism Australia’s Regional General Manager UK/ Northern Europe, said: “This campaign encourages people living in Australia to invite their UK based friends and family to experience our unique Aussie lifestyle and incredible tourism experiences. The trilogy of videos is very powerful and we’re confident it will inspire Brits to make 2015 the year they visit loved ones in Australia.”

Kronenbourg - Lift Off
View all Work