Havas and Darling Films are on fire with this new spot for Gaviscon Double Action….

There’s nothing worse than heartburn interrupting your meal, the team at Havas joined forces with Director Simon Willows from Darling Films to show how you can knock it away faster and for longer in this charming new playful TVC for Reckitt Benckiser’s Gaviscon brand.

The entire team at Absolute were delighted to be on board and collaborate on this unique creative where our heroine physically bats away burning fireballs and the restaurant becomes the battle ground.

We were very fortunate in the fact that Absolute’s Head of CG & Creative Director James Coore was involved in the concept at a very early stage, giving us plenty of time for craftmanship – “we undertook a considerable amount of research and development on the look and feel of the fireballs; it was a particular challenge to create fireballs that were realistic yet playful and unthreatening.”

“Our early involvement also ensured that we had time to assist with the careful planning of the shoot and fully engage in the design process with the art & special effects departments. The puppet burger created by the very talented team at Machine Shop gave us the perfect platform from which to launch our CG fireballs.”

After all the planning was done, James joined fellow VFX Supervisor Scott Simmonds on-set to provide all manner of visual effects supervision for the shoot and most importantly to capture the crucial data we required in order to make the fire fx as realistic as possible.

It was then over to Ameen Abbas, Absolute’s CG & FX Lead and it was his job to make sure that the fireballs were one of the stars of the show, he explains that “the key to the flames was to achieve a candle-like, small scale flame that not only passed as a small flame but also had enough interesting dynamic detail within it.”

It wasn’t just the fireballs which had to look incredibly real and engaging, it was the entire shot interaction and set-up within the environment, for example, “the smoke trails required a very complex simulation, both in the way they moved through the air and how they interacted with the lighting of the scene. We built a CG version of the paddle which allowed us to simulate the smoke billowing away with every paddle strike, this added an extra layer of realism and gave the trails a more fun, interesting aspect to their behaviour”.

Ameen, Matt and the team also added some additional effects to help the narrative along and give the sequence more impact and power, “these included adding small collision puffs with every paddle strike, alongside a thin billow of smoke that dispersed as the paddle was spun at the end of the sequence”.

It was a true pleasure to collaborate with the teams at Havas and Darling on such a lovely concept, and this, alongside the great attention to detail from the agency, production and post-production teams, ensured we were all very pleased with the final results. 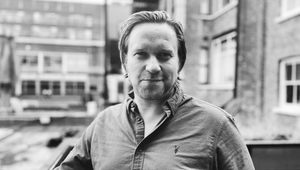