Directed by Chris Jones, the ads evoke the spirit of 80s action movies 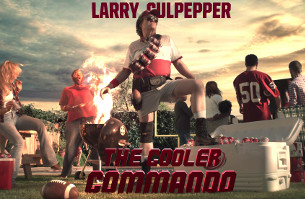 Zoic Studios Director/Executive Creative Director, Chris Jones, harkens the spirit of bangin’ 1980s film heroes in a decidedly bold series of digital posters for Dr Pepper College Football, out of The Richards Group. Directed by Jones and led by VFX Supervisor Vince Blin, the Zoic team crafted three ‘80s-inspired “motion posters” for the 2016 college football season featuring Dr Pepper’s beloved concessionaire—and renegade icon—Larry Culpepper. In each :15 digital poster, Larry is frozen in an epic pose befitting of such an idol while the world behind him moves in ultra-slow-motion. Each moment is the quintessential ‘80s heroic poster frame-up as we hear Larry’s voiceover extolling the greatness of Dr Pepper in the midst of college football season. The posters culminate with Larry coming to life and shattering the illusion, looking straight into the camera for a one-liner only Larry Culpepper could deliver.

You can view the digital posters below:

And “Big Man on Campus”

To engulf viewers in this ‘80s sports nostalgia, Jones approached the creative piece from the perspective of a fashion still shoot, rather than a standard film shoot, which allowed him to maintain the ability to control both light and action. To achieve this, all of the digital posters were shot in multiple layered elements. The first element shot was the hero talent. Larry needed to be lit perfectly, with a uniform fill and a hot key, to give him a statuesque shape and an epic, heroic feel. They shot the actor in front of a green screen to allow for maximum manipulation of these characteristics. The corresponding backgrounds were then shot on location at high-speed, allowing the Zoic team the flexibility to manipulate the elaborate scenarios required to elevate the over-the-top ‘80s aesthetic. Additionally, shots of various “Easter egg” details were layered into the composite of the vignettes, creating further depth and movement. Shooting the separate foregrounds and backgrounds allowed the team to combine multiple frame rates to seamlessly create the effect of Larry being frozen while the background moved in ultra-slow-motion.

The digital posters are part of an integrated consumer campaign that includes national TV, print, radio and billboard ads, unique digital content and a 360 VR video, also helmed by Jones.