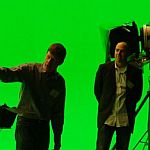 Los Angeles, CA - (January , 2011) -- Imagine stepping onto a green screen set where you can see the middle of a virtual set that can be moved, manipulated, lit and filmed. This is the world of virtual production at Universal Virtual Stage 1 (UVS1) created in collaboration with Zoic Studios for a fully integrated virtual production pipeline that takes projects from pre-production through post.

Universal Studios officially opened UVS1 in December for both internal and third-party productions. All of the pieces on stage are modular so productions can choose to keep or remove elements depending on needs, and clients can bring in their own camera package and lenses. Film cameras can be also used if they have a high definition video tap. The entire system is tied to editing bays with 60 terabytes of online storage.

"The virtual stage is a pre rig, pre calibrated turn key facility designed for the most simple to the most complex shoots.  We are excited to be able to offer UVS1 for both internal and third party clients as well," says Jeff Berry, Executive Director Virtual Effects and Production Services at Universal.  "Working with Zoic was an integral part of developing the facility."

Mike Romey, Zoic's Pipeline Supervisor, designed Zoic's virtual set pipeline, which was first developed from Zoic's work on the episodic television show "V."   Says Romey, "Universal asked us to put together a virtual pipeline for them based upon Zoic's Environmental Unification System (aka ZEUS). Taking what Zoic developed for 'V' we worked together to make a facility where you could control the process up to the point of layout. You could be at stage where you could do acquiring, content distribution, layout, but you were in the same localized facility and vicinity and storage so there was no disconnect. We are really proud that we had the opportunity to work with Universal and of what we created together."

"If you have a project that has a virtual set and you have a high volume, not only are you pre-visualizing what you're doing, but it allows the Director and the talent and the DP to interact with the environment in real time," adds Gina Fiore Zoic's Executive Producer of Television.  "The DP can see how the shots are laid out and create lighting changes.  The big part of what goes wrong I think with green screen is that the talent isn't lit very well. When you go to integrate talent into a scene it can become problematic.  When you can actually see the set, you can light to it and the talent.   UVS1 is also very beneficial to talent. They are able to look at themselves in the monitor and line themselves up to the environment."

"The virtual set comes in handy when there is a show that is using a lot of virtual set environments," she continues. "Instead of having to start from ground zero and get the shots in house, you are already about 30% or more there depending on how well you can light and integrate the virtual set before you get into post-production. When the editors get the content, they aren't looking at green they are looking at a virtual set they can cut together. Then, for approvals, everyone can get a sense of how the scene is going to play out instead of having to look at it in a complete green environment."

For more information on Universal's Virtual Stage 1 check out the website at: http://universal.filmmakersdestination.com/content/universal-virtual-stage-1