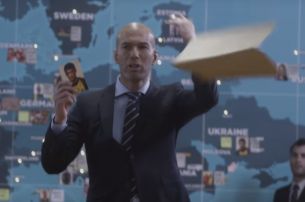 For the UEFA Euro 2016, Orange is launching a new global sponsorship platform, built around a 360 concept ‘Orange Sponsors You’.  Developed by the Publicis Group agency POKE, the new platform will go live during the tournament.

Publicis Conseil is responsible for all ATL communication to support the platform, having launched on May 29th a TV campaign featuring the iconic Zinedine Zidane. The former leader of “Les Bleus” is the head of fan recruitment. His mission, with the help of his young assistant Henri is to find the very best fans all over the world and bring them to the competition. The film will be broadcast in different formats, both on TV and digital across Europe, Africa and the Middle East.

Cécile Lejeune, Worldwide Account Director at Publicis Conseil, said: "The UEFA Euro 2016 is a great opportunity for Orange to create a global image campaign across 28 countries and demonstrate how this international brand will actually bring people closer to what really matters to them… football!"