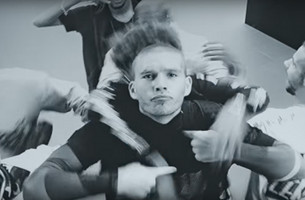 Real Madrid stars Zinedine Zidane and Marcelo have been joined by a group of young amateur soccer players as the stars of a new campaign from adidas celebrating how creativity in sport can get you noticed.
In the campaign film, which was created by 72andSunny and directed by Iconoclast’s Paul Geusebroek, the players from the UK, Spain, Mexico, France, Germany and Italy are seen using Real Madrid’s renowned training facility in a bid to showcase their creativity. Zidane and Marcelo watch on as the players sneak into the facility, play soccer through the hallways, replace the jerseys of Real Madrid’s star players with their own shirt and even produce a bold trick on Marcelo as he confronts the group on the training pitch.
Following chapters in ‘Unleash Your Creativity’ and ‘Create Positivity’ the latest campaign features a group of adidas Tango Squad players – soccer obsessed 16-19 year olds living in 15 cities worldwide – showcasing how creativity in sport can change everything.
The film is the latest chapter in the Sport17 ‘Here to Create’ brand campaign designed to celebrate the role of creativity in sport. The campaign underlines the brands position as the Creator sports brand, highlighting athletes who express their creativity in their game, life and world.
Ryan Morlan, VP of Global Brand Communications for adidas, said:
“As the Creator sports brand we believe an athlete’s imagination and creativity can take them further than their body or mind alone ever can. ‘Creativity Gets You Noticed’ builds on this belief by showing how a group of grassroots athletes can harness the power of creativity to redefine how to get noticed.”
As part of the brands open source strategic approach – a process of co-creation with athletes, customers and partners – the concept will also extend to adidas owned channels including adidas.com. The website will be redesigned to appear as though the Tango Squad players have designed it themselves, with their faces replacing the likes of Leo Messi.
The campaign launched yesterday, Tuesday, Sep. 12, and will rollout globally over the coming days.
view more - Creative