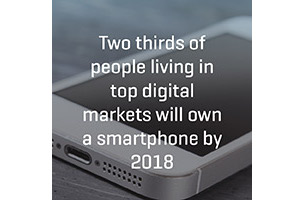 66.5 per cent of individuals in key digital markets will have a smartphone by the end of 2018, according to the New Media Forecasts report from ZenithOptimedia, published today. In 47 leading countries* smartphone penetration rose from 41.6 per cent in 2013 to 49.5 per cent in 2014, and it will reach 55.7 per cent this year.

This fourth edition of ZenithOptimedia’s annual New Media Forecasts report provides snapshots of the current state of digital marketing in 47 countries, covering topics such as internet access, media consumption and online behaviour, and forecasts the rise of internet connections and smartphone and tablet technology.

Smartphone adoption is highest in Asia Pacific and Western Europe, and we expect these regions to maintain their lead for the next few years. Of the 47 markets studied, Singapore has the highest level of smartphone penetration, at 89.0 per cent at the end of 2014, and we think this will leap to 97.0 per cent by 2018 as the government pushes ahead with its plan for universal Wi-Fi access. Spain and Ireland follow close behind, with 86.7 per cent and 83.0 per cent penetration in 2014 respectively. The other top ten markets are also all in Asia Pacific and Western Europe: South Korea, Norway, Japan, Austria, Sweden, the Netherlands and Hong Kong. Switzerland, Australia and Denmark are predicted to enter the top ten by 2018, at the expense of Japan, Sweden and the Netherlands.

Internet user growth is slowing down

The top market for internet penetration is South Korea, where access is universal and has been since 2011. Close behind we find a clutch of northern European markets such as Denmark (98 per cent penetration in 2014) and the Netherlands (96.7 per cent), which have relatively small and tech-savvy populations. In all, seven markets in our report enjoyed internet penetration above 90 per cent by the end of 2014: South Korea, Denmark and the Netherlands, plus Norway, Switzerland, Finland and Sweden. By the end of 2018, we think that 15 of our 47 markets will enjoy more than 90 per cent penetration.

We forecast South Korea to remain the top market for internet penetration in 2018, while Argentina and Estonia enter the top ten rankings, displacing Singapore and Ireland, which in 2014 were in eighth and ninth place respectively.

“The rapid spread of mobile technology is transforming media consumption and marketing communication across the world,” said Jonathan Barnard, ZenithOptimedia’s Head of Forecasting. “For more and more people, their smartphone or tablet is the first place they look for information or entertainment. Marketers need a mobile-first approach to communicate with these people effectively.”