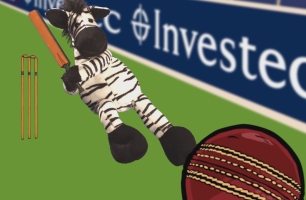 A+C Studios were approached by Investec, an international financial services and the lead sponsor for the Ashes, to create an animation that would help to generate and reflect the excitement and enthusiasm surrounding the cricket tournament.

Zebbie, a free giveaway plush toy created especially for the Ashes- was inspired by Investec’s distinctive Zebra icon; as a symbol of the brand’s South African origin and unique ‘out of the ordinary’ approach. Both A+C and Investec felt Zebbie should be the protagonist for the campaign, as a means of engaging younger viewers and core cricket supporters by developing a rich and relatable back story behind the company’s already well established brand image.

The campaign aligns Investec’s high profile and long-standing sporting sponsorship with the excitable and engaging Zebbie persona- encouraging viewers to get involved and interact with the company’s social media channels. The public is given the chance to become a part of Zebbie’s story by tweeting “zelfie’s”, with an added bonus of the possibility of free tickets to the Ashes.

A+C also felt it was important to animate Zebbie in an environment that added to his character; bright, fun and full of cricket.  The sets and props featured in the animation were created and included with the idea of developing a vibrant setting for Zebbie’s story to develop.

‘Zebbie Zelfie’ contributes a captivating and imaginative story behind Investec’s brand, creating an association of excitement and approachability within the context of the 2015 Ashes. By placing Zebbie at the center of the campaign, the public is offered a tangible representation of Investec’s values and unique approach, further enriched by the compelling story A+C’s animation provides.