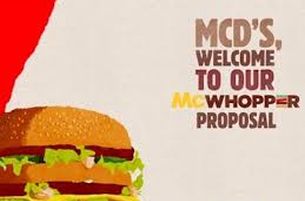 At last night's award show at Cannes, Y&R was awarded the Grand Prix in the Media category for the McWhopper campaign created by Y&R New Zealand for Burger King.  The campaign picked up another Grand Prix opening night in the Print & Publishing Category, as well as 4 Gold and 2 Silver Lions.

The campaign, which began with a print ad in The New York Times and The Chicago Tribune, and was surrounded by shareable content, struck a chord around the world.  The campaign went viral, with nearly 8.9 billion media impressions, $138 million in earned media and a 40 percent increase in awareness of Peace Day, uplifting all of Burger King’s brand attributes.  Around the world, people uploaded videos of their own McWhopper creations.

Tony Granger, Global Chief Creative Officer of Y&R stated:  “We are ecstatic to win a second Grand Prix for the McWhopper campaign tonight.  Josh Moore, Tom Paine and the whole team at Y&R New Zealand were passionate and persistent — and it goes without saying that the campaign would not have taken flight without Burger King’s SVP of Global Brand Marketing, Fernando Machado.  We thank him for his faith in the team and the power of a great idea.”

Josh Moore, CEO and CCO of Y&R New Zealand, stated:  “On the morning that the print ad appeared, we were ready and armed to help consumers connect with the campaign.  It was extraordinary, however, to see it come alive  and then go viral.  Here at Cannes, we are grateful and thankful for this second Grand Prix and the recognition of our industry.  This is truly memorable.”

Last year, Y&R won the Media Grand Prix for Vodafone’s “Between Us” campaign.