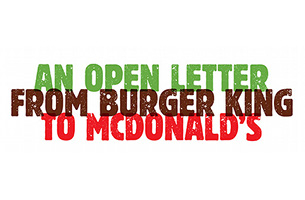 Says Michael O'Rourke, president, New York Festivals: "I think it speaks volumes about the caliber, quality and sincerity of this year's Executive Jury.  It's was a defining moment that not only helps further clarify the mission of New York Festivals, but the industry at large, underlining the fact that both pieces of work were so adamantly admired and supported, leaving us no other choice than to award both campaigns as Best of Show.

"These campaigns equally exemplify the very best this industry has to offer. The notion that award shows are all about stroking egos is something we've all heard before.  But if you had the opportunity to witness what I just did over the last 5 days, you'd immediately realize that the sole intention of this year's Executive Jury was to recognize and celebrate the ideas that truly stood for something.

“The NYF trophy isn't a pat on the back.  It's an affirmation, and a symbol of genuine respect from over 400 professionals around the world, who day in and day out face the same challenges you do.  That has to mean something.” Said O’Rourke.

Says Tom Paine, creative director, Y&R New Zealand: "Aside from boasting the sexiest trophy on the awards circuit, a win at New York Festivals is also amongst the industry's most coveted. So to land the big one and rub shoulders with the likes of Inglorious Fruits (2015 Best of Show) and Epic Split (2014 Best of Show) is an incredible feeling and the agency couldn't be prouder."

“We are thrilled to be awarded Best of Show at tonight’s ceremony. This was an idea that we believed in passionately, but it would not have been possible without our client, Fernando Machado, who supported and inspired us. Tonight’s award is proof that brave clients get the work that they deserve.” Said Granger.