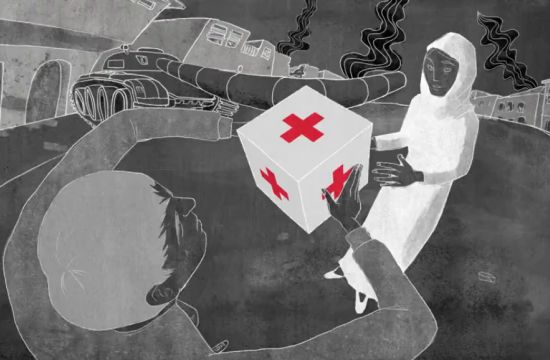 In the spot, the camera follows a Red Cross aid package as it transitions through different situations of crisis and delivers relief to people in need.

"We wanted to take the material and create a real roller-coaster of imagery and emotion," commented Holbrooks Director, Daniel Gray. "We wanted to show how Red Cross is brave and committed in their quest to helping those in need.”

Holbrooks created a sophisticated look in response to the agency’s brief. The monochromatic tone throughout the film helps convey its serious message while a neutral backdrop makes the Red Cross emblem pop.

"Everyone working on the project was of the same mind for the direction," said Holbrooks Director Tom Brown, who oversaw the NYC animation team. "The design is closest to the true Holbrooks personal style.”

The team employed a mix of cel animation and 3D camera work to balance handcrafted warmth with dynamic storytelling. Holbrooks took advantage of being located in both New York City and Budapest to maximize production days, working around the clock with the New Zealand client to manage the compressed production schedule.

Music and sound design by Antfood supports the narrative — a journey from a serious and dark place to a resolution that is more hopeful.

The spot is currently running in New Zealand as part of the Red Cross Annual Appeal.