Ko and Harrison were one of two teams to win Gold 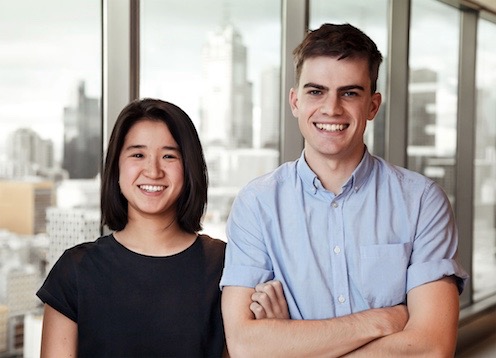 Adding to this week's announcement of this year's London International Award winners, the results of the Gorilla Doctors creative competition have also been announced and Y&R Melbourne's Janice Ko and Jack Harrison is one of two teams to be awarded Gold for their 'Gorilla Health Plan' work.
Says Ko (left) and Harrison (right): "We're pretty thrilled with the result and the recognition, especially considering the tough competition. This brief success should silence our imposter syndromes for about two days."
The challenge was to produce a creative piece of work to help promote the work of the Gorilla Doctors and the prizes on offer were a once-in-a-lifetime trip for two to visit Rwanda, home to the critically endangered Mountain Gorillas. And, for a second team be invited to participate at LIA 2019 in Las Vegas.

'Gorilla Issues Tissues' by Sadie Mayes, art director at VCCP Health London was chosen as the First Prize Winner of the Gorilla Doctors' Competition. Meyers wins an Ecotour trip donated by Terra Incognito Ecotours.
The second Gold winners were- Annie Kimber and Caitlin Biller of Langland, Windsor for 'Donate Your Difference to Make One'.
Silver went to Megan Knoph and Chelsey Eichler of MRM//McCann Detroit for '#LikeMe'.
Bronze winners were Lucy Downs and Nick Crawford from Strawberry Frog New York for 'Limited Edition' and Soleil Badenhop of Dentsu JaymeSyfu, Makati for 'Citizen Ape'.
All entries were judged on site during the London International Awards judging and Creative LIAisons program held in Las Vegas.

The response to the competition was astounding - with 243 individual entries received.

30 concepts were then shortlisted to be shown in the final judging, with the whole gathering of 100 young creatives attending the Creative LIAisons witnessing the judging.

Following the final round of judging 9 concepts made the cut to win Gold, Silver, Bronze.
The final judging saw 5 concepts rise to the top and there was a general consensus that at lest three of these concepts must get released.
The competitions was generously sponsored by McCann Health.

There are currently about 1004 mountain gorillas left on earth. Habitat loss, poaching and disease have made these gorillas one of the most endangered species alive. Today, thanks largely to the efforts of a group of dedicated veterinarians called Gorilla Doctors, their numbers are rising.
Gorilla Doctors are a team of 16 doctors who operate across gorilla territories - spanning the rainforests of Rwanda, Uganda and the Democratic Republic of Congo (DRC). This team is supported by the non-profit Mountain Gorilla Veterinary Project (MGVP. Inc) and the UC Davis Wildlife Health Center.
They are the ONLY provider of in-situ veterinary care for wild mountain gorillas in Rwanda, Uganda and DRC and their close cousins, the Grauer's gorillas in eastern DRC. Gorilla Doctors' main goals are to keep the gorilla populations safe, healthy and thriving. They treat the gorillas for life-threatening injuries and illnesses caused by close contact between gorillas and humankind.
view more - Awards and Events