Awards and Events 420 Add to collection 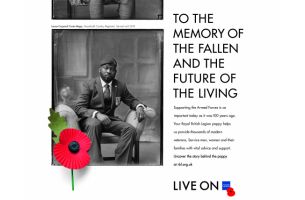 The Royal British Legion’s ‘Portraits Behind the Poppy’ brand campaign was created by Y&R London and launched to mark the 2015 Poppy Appeal. The poignant campaign meticulously recreates portraits of First World War soldiers with modern service men, women and veterans, the juxtaposition reminds audiences that The Royal British Legion’s Poppy Appeal supports both the armed forces of the past, and the military of today.

The powerful images, taken by photographer Tom Reeves, were captured using the exact same camera, technique, and hand-painted background as his grandfather, Benjamin Reeves, used to photograph First World War soldiers in 1915. It was the first time the camera had been used in over 65 years. The portraits became the centrepiece of a national integrated campaign that included online films and interviews, print, outdoor, social and digital, all created and produced by Y&R London. The photographic series was also exhibited at the National Media Museum, who donated their space to house the photographs.

The Effie Awards are known by advertisers and agencies globally as the pre-eminent award in the industry, and recognise any and all forms of marketing communication that contribute to a brand's success. Since 1968, winning an Effie has become a global symbol of achievement.

Emily James, Chief Strategy Officer at Y&R London, said: “We are delighted that our Portraits Behind the Poppy Campaign has been awarded an Effie. The campaign drove reappraisal amongst a younger audience, exceeded income targets and delivered a strong ROI – all during a period when the nation was suffering ‘Remembrance fatigue’ following the Centenary year.”

Gary Ryan, Director of Marketing and Communications at The Royal British Legion, said: “The poppy is a powerful symbol of Remembrance and hope, which is perfectly articulated in our campaign featuring Service personnel from the First World War and our modern day beneficiaries.”