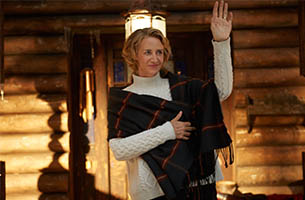 The Mrs Claus campaign for M&S Christmas won a Silver statue in the Promotion & Activation, use of Broadcast, category at Cannes Lions, the Festival of Creativity this week. Y&R London’s category changing campaign was a seasonal blockbuster, creating an emotional connection between M&S and their core customer - women. M&S’s most immersive campaign to date included social media takeovers featuring a Mrs C emoji and the hashtag #LoveMrsClaus, outfit and gift inspiration both in-store and in editorial, a partnership with Channel 4, and a social promotion that saw Mrs Claus give away 15,000 presents to customers.

The campaign was shaped around Mrs Claus, arguably Santa’s better half, who played a special role at Christmas, helping a select few make Christmas extra special for their loved ones. Just like real women everywhere.

We introduced the first Lady of Christmas on the 11th & 12th November with a 2min & 3min TVC. Directed by Oscar winning Tom Hooper and with a soundtrack by Rachel Portman, we told the story of a Christmas delivered with love. We further leveraged Mrs Claus to drive impact and delight audiences with personality at key moments in the social media calendar – her top tips on everything from presents to mince pies.

She also appeared in store windows and on in-store décor; and even help launch Christmas on Channel 4. Working in close partnership with C4 and their creative agency (The Outfit) we watched as Mrs Claus kick start Christmas 2016 for the brand.

“Given the competition, winning Silver is an incredible achievement. I’m thrilled our campaign for M&S has received such a prestigious award. Mrs Claus became part of popular culture, a goal for all our campaigns at Y&R London.” Jon Burley, CCO Y&R London