Jon Burley develops his creative vision for the agency by hiring an eclectic group of creative talent including former Deputy ECD and creative partner, Jim Bolton 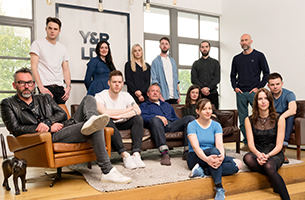 This week Jim Bolton joins as Deputy ECD. Bolton has formerly worked as Burley’s Deputy ECD at both Leo Burnett and CHI & Partners, and brings with him an industry-renowned heritage of famous, award-winning campaigns for brands as diverse as McDonald’s, Britvic, Argos, British Gas, Samsung, Talk Talk and The Times. Two more Creative Directors join the new department. Mark Farinha, formerly a Creative Director at Drum, also joins this week. Farinha’s experience as a content creative director includes producing a national radio show for Boots, writing a comedy travel show for Virgin Holidays and helping integrate a storyline into Coronation Street for Macmillan Cancer Support. Creative Director Gavin McGrath returns to the UK after a three-year stint in Los Angeles as a CD at Mullen Lowe. Prior to creative directing the Samsung account at Leo Burnett Chicago, McGrath worked at BMB, where he created the multi-award-winning ‘Ogre’ commercial for Thomson holidays and the equally awarded ‘Friends’ campaign for Carling.

Joyce Kremer and Sophie Taylor join from Grey London, where they joined forces last year and worked on campaigns for key clients such as Volvo and Vodafone. Kremer is a member of the She Says committee, an organisation that provides free mentorship and advice for women in the creative industries. Taylor, previously a writer for Grazia and a script editor in the film industry, worked at 18 Feet and Rising as a solo creative, producing campaigns for Nando’s, House of Fraser and The National Trust.

Sean Johnson and Josh Pearce join from Brothers and Sisters, where they produced award-winning campaigns for Sky Sports, Carphone Warehouse and Pearl & Dean. Outside of advertising, Johnson and Pearce have created Brass Monkeys, a sustainable underwear brand. Nina Beyers and Tom Espezel-Bentley join from 4Creative, where they most recently produced the award-winning, multi-platform ‘Product Recall’ campaign for the drama series ‘Humans’.

Amy Fasey, a solo creative with a design background, joins after a stint as a ‘Kennedy’ at W+K along with Slavka Bozhinova, who created high-profile digital and design projects in her home country of Bulgaria for brands such as Volkswagen, Audi, Adidas and J&B Scotch. George Robb has been hired after a period of creative placement at the agency, during which time he created the provocative ‘Dyslexic Sperm Bank’ campaign for Made By Dyslexia.

Whilst at HHCL + Partners, Jim Bolton created the infamous ‘St George’ Blackcurrant Tango campaign, one of the most-awarded TV commercials of all time. Together with Burley, he helped transform CHI & Partners into the most-awarded independent creative UK agency at Cannes last year, and is expected to take a similar role and responsibility at Y&R London.

“This is a huge investment in a multi-disciplined, renaissance creative department that can truly deliver against the shared ambition of the agency and its client partners. I’m genuinely thrilled to be able to draw upon such a diverse range of extraordinary talent, and couldn’t hope for a more wonderful gang of freaks and geeks to help us drive forward into a new era of creative excellence at Y&R London.” Jonathan Burley, CCO, Y&R London.