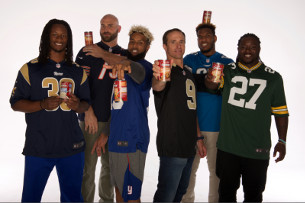 By visiting EverymanLeague.com, fans who create an Everyman All-Star player card will be placed on one of the general managers’ teams, and be entered into a sweepstakes for the chance to win Super Bowl LI tickets, NFL-licensed autographed gear and additional prizes.

“In this campaign, we turned the tables on traditional fantasy football and asked NFL superstars to draft everyday guys in Drew Brees’ basement,” said Abby Elu, Brand Manager, Campbell’s Chunky soup. “In a fun and light-hearted way, the campaign celebrates the daily victories the ‘everyman’ tackles on and off the field and highlights how Chunky soup fills up all kinds of people – from a Super Bowl stars to busy parents and loyal neighbours.”

Y&R New York created the advertising campaign to play on the popularity of fantasy football and offer an opportunity for top NFL stars to champion the everyday guy. Two humorous spots, “Montage” and “Draft Day,” are currently live on YouTube. Throughout the NFL season, four additional spots featuring Brees, Beckham Jr., Lacy, Gurley, Ebron and Long will premiere on ESPN, the NFL Network and YouTube capturing the action of the Everyman All-Star League from Drew Brees’ basement.

The Chunky integrated marketing campaign includes Everyman All-Star League on-air and digital integrations on NFL Network and ESPN, along with local market activations and social media engagement. Throughout the season, a Chunky food truck will tour local supermarkets and stadiums on game day to offer people the opportunity to sample the latest Chunky flavors. There will also be several activations leveraging Campbell’s NFL team deals, including in-store appearances and NFL player meet and greets.

Fans can visit EverymanLeague.com, Twitter.com/CampbellsChunky and YouTube.com/ChunkySoup for additional content and information, and www.Chunky.com to learn more about Campbell’s Chunky soup. No purchase necessary. Ends 12/4/16 at 11:59:59 PM ET. Open to legal residents of 50 US/DC, 18+. Official Rules: EverymanLeague.com. Void where prohibited. The NFL Entities (as defined in the Official Rules) have not offered or sponsored this sweepstakes in any way.