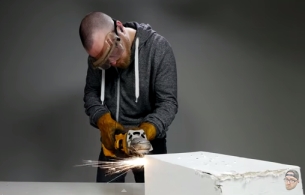 Mars Chocolate is excited to announce the launch of a new global digital execution of the SNICKERS “You’re Not You When You’re Hungry” campaign. The campaign, which has been launched simultaneously in eight countries, brings the brand concept to life on YouTube using video bloggers popular with fans in the UK, US, Puerto Rico, UAE, Egypt, Turkey, Lebanon and Brazil.

In a global first, the popular Youtube ‘how to’ vloggers present their videos as if they were hungry and off their game.  While the videos start in the normal way, it soon becomes apparent that something isn’t right as their usually expert demonstrations descend into chaos. The endframe of each video hints that the vlogger is back to their old self, along with a SNICKERS logo and the endline ‘You’re not you when you’re hungry’.

Dan Burdett, SNICKERS Global Brand Director, comments: “We are excited to be extending the reach of our phenomenally popular SNICKERS® brand online tapping into the global popularity of ‘how to’ videos. The ‘off their game’ vloggers are an innovative digital twist on our hugely successful “You’re Not You When You’re Hungry” TV ads. Between them the international vloggers in this campaign have over 7.5m subscribers, giving the brand campaign huge global reach.”

The alternative video blogs are the latest digital extension in the hugely popular “You’re Not You When You’re Hungry” SNICKERS campaign, most recently manifested on TV with the iconic and internationally recognisable Mr Bean starring as a Kung Fu Master; since then the Kung Fu ad has had over 8m views on digital channels.

The video blog idea, conceived at AMV in London by Alan Wilson & Diccon Driver has been globally executed by BBDO, and all films are available now on YouTube.