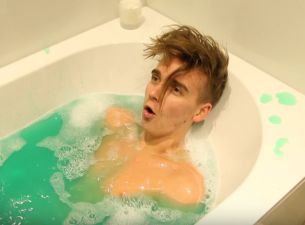 In its latest campaign from iris, Original Source has challenged one of the most successful YouTubers in the UK, Joe Sugg to #PackMoreIn with his millennial audience.

Original Source is a brand renowned for its feistiness – which is why prankster and cheeky chappy Joe Sugg, who recently stopped thatching roofs in the West Country to become a full time YouTuber – was the perfect fit for the brand.

From YouTuber Whispers to the Electric Shock Ball Challenge, Joe is never short of a new video idea that will take YouTube by storm. His dedication to making great, creative content shines through and explains his quickly growing YouTube audience – commanding 7 million subscribers on YouTube .

Following the launch of #PackMoreIn in 2016, a global campaign which made heroes of three lucky Original Source users thanks to some mind-blowing situations (swimming with sharks anyone?), the brand is now challenging Joe to #PackMoreDaresIn. Joe’s 7m+ followers are able to challenge him to any Original Source related dare… and he’s already received tens of thousands of entries.

Gael Laurie, Global Head of Brand for Original Source, said: “We know Joe loves the Mint & Tea Tree shower gel. We also know the Original Source Mint shower gel leaves you invigorated and tingling from head to toe – it’s super intense! So what better dare than to challenge him to the most intense #TingleTime ever? Joe lives the Original Source #PackMoreIn ethos of maximising the moments that every day brings.”

Understanding the impact of influencers on their audience, Original Source has moved away from a traditional ad campaign, instead opting for a series of films and activations that fall under the #PackMoreIn banner, hoping to accelerate brand awareness and preference amongst a millennial audience by creating content that is more likely to entertain them, and create a conversation they want to be a part of, rather than ‘sell to them’.

Digby Lewis, Head of Platforms & Distribution, Content That POPS, said:  “We needed an idea to give the brand a meaningful role in people’s lives – not just their bathrooms.  Creating influence as part of culture has much more meaningful impact, than mass-market advertising.  Through this idea we are able to drive effective participation thanks to a partnership with the right influence – Joe, who is perfectly aligned to everything #PackMoreIn is about and has a huge targeted reach for our audience.”