INFLUENCER: Rothco MD and father, Richard Carr, parallels the thoughts of his 11-year-old son, Harrison, on the YouTube generation 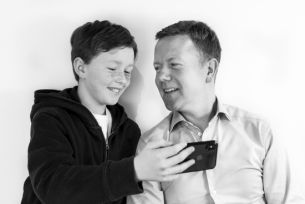 Interestingly, according to Variety Magazine, 6 out of 10 influencers for 13 – 18-year olds are YouTubers. Far more interesting is that NONE of the six are known by their parents and potentially even their older brothers and sisters.

Never in the history of humankind has a form of communication had such a powerful impact on one demographic with virtually none on the rest. From cave paintings to the first printed bibles, from early radio to the flat screen TV, everything was accessible to all - and mostly shared and viewed together. Even the most out of touch 1960s parent knew who The Beatles were.

It wasn’t until my 11-year-old son recognised Casey Neistat (and only Casey Neistat) from the Cannes Lions speakers last year that the disparity between our content habits really hit me. Sharing with you his piece, in his own words, I can say it highlights some real reasons brands need to start listening to the YouTube kids.

HARRISON: “I can’t imagine a world without YouTube. It would be incredibly boring with far less entertainment and fun stuff. Sometimes I watch a documentary on TV that my dad has recorded or a rugby match but there is nothing like YouTube, it has everything. And it’s mine. I mean there is just the stuff I want to watch there.”

When asked whether they prefer watching YouTube or watching TV programmes on a TV set, both 8-11s and 12-15s are more likely to opt for YouTube according to a recent Forbes study. A whopping 70% of Gen Z’s watch more than two hours of YouTube each day and younger audiences watch more hours of video on YouTube and other digital outlets than TV. In essence, YouTube is a video platform for the people, by the people. This makes it so much easier for creators to share unique content with a large viewing audience.

HARRISON: “After homework I go on YouTube. I remember the early days of YouTube when I was really young. The videos were so basic. It was sort of fun then but it’s better now. The first video was posted in 2005 the year before I was born. It was epic fails and funny stuff. Then it was about experiments. Nowadays it’s vlogging. Logan and Jake Paul go around showing their lives - they make a million euro a month, I have heard. It’s been around for so long but it’s only got popular this year. I started putting videos on YouTube in 2010 with my dad. The most popular job in my class is being a YouTuber as they earn the most money and have the most fun.”

The content that children like to watch on YouTube differs by age. Younger children (3-7) are most likely to watch TV programmes, films, cartoons, mini-movies, animations or songs - with parents saying this is their child’s favourite type of YouTube content. As children get older, this makes way for music videos, funny videos/pranks and content posted by vloggers, with the qualitative research finding that vloggers in particular are an important source of teen-oriented content. YouTube creates a more personal relationship with its viewer with just one simple technique — acknowledging that there are viewers on the other side of the screen. The video blog layout of YouTube does give it an extra edge over mainstream media. As a result, YouTube holds the title of the second most-used online search engine, with more searches than Yahoo, Bing and Explorer combined.

HARRISON: “PewDiePie has 57 million subscribers - that means someone who follows you. He is much more popular than anyone I know. But most adults have no idea about any YouTuber like Jacksepticeye or Casey Neistat. That’s really weird since they are all so famous.”

What Harrison says is true. The YouTube stars have built a deeply personal relationship with their young fans and it’s been very rewarding for them. PewDiePie made over 15 million dollars in 2016. The income of the top 20 YouTubers also rose by 23% last year.

What is really shocking though is that the 10 highest grossing YouTubers have a combined 168 million subscribers and 44 BILLION page views. In vivid contrast, the 1969 moon landings reached 600 million eyeballs, Tonya Harding’s 1994 Olympic final was viewed by 126 million and Charles and Diana’s wedding 750 million.

HARRISON: “I am only 11, so I always need to find out about new stuff that I don’t know. There is nothing you can’t find out on YouTube”.

YouTube has quietly become an Encyclopedia Britannica, The Beano, Knight Rider (and every other favourite TV show of older generations), a trusted older brother, the school yard prankster and the primary supplier of late night clandestine viewing material to an entire generation.

This generation can’t be found in charted territory. They have no interest in viewing content like we do, nor our 'expertise' in making it. Typically, across history, people have learned by example. After the Vietnam war, a former US Army advisor said: “We fight the next war like we fought the last one. We are prisoners of our own experience.” Aside from describing some of the many failings of the USA in such a terrible war, this statement is powerful summation of how we approach just about anything in life - advertising included. We tend to learn a way of doing things, become 'expert' and then apply it to new situations. But if you are always working from past experience, how can you ever approach something you have no experience in? This may be the first time in history where no one working in our industry is of an age group that has first hand experience of what Gen Y want. When it comes to marketing for the future generation, we shouldn’t be applying past tactics but re-writing the playbook. Harrison and the millions of the YouTube generation will be fully fledged consumers within seven years. The race to connect with them is on.