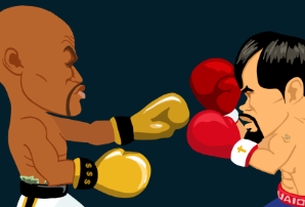 Pacquiao vs Mayweather, the fight of the century, is almost upon us. But before it starts another fight is playing out: the ‘fight before the fight.’ Trash is being talked, sides are being taken. Boxing fans, celebrities and many others are weighing in and throwing punches of their own.

BetVictor, in partnership with VCCP, has created an online venue for this 'fight before the fight’. TweetRumble is an innovative social platform where every tweet gets you involved in the fight by throwing a punch on behalf of your favourite. Boxing fans will be encouraged to get off the fence and land a blow for their boxer of choice. Spectators will become supporters, and supporters will become punters.

By going to tweetrumble.com users are encouraged to tweet their support with #TheMoneyTeam or #TeamPacquiao. They will then be served a custom animation powered by their tweet and their guy will throw a punch that downs the opponent. As well as seeing your own tweet pack a punch, the number of mentions in favour of each fighter will sway the balance of the animated showdown, acting like a social swing-o-meter.

Created by VCCP’s digital department, the platform draws in original backend elements which, among other things, allow live measurement of who’s backing whom, which big name celebrities are putting their weight behind which fighter, special bespoke animations and the latest BetVictor odds.

Initially TweetRumble will show the Pacquiao vs Mayweather fight, but the intention is for this to be a platform for any high profile head-to-head, where the build-up to a big event plays out and the antagonists can be seen squaring up to each other.

Anton Bell, CMO of BetVictor said: “Everyone has an opinion on this fight, our customers included. The 'fight before the fight' is a great opportunity to put our social teams to work engaging with boxing fans and bettors alike.”

Julian Douglas, Vice-Chairman of VCCP said: “This is the biggest fight of the century and we’ve created the venue for the fight before the fight… An innovative technological platform, giving fans the opportunity to land their own punches in the social media battle.  It’s a great opportunity to partner with BetVictor to engage with customers and boxing fans.”

VCCP are using the Twitter Stream API to monitor tweets with the #TheMoneyTeam & #TeamPacquiao hashtags in real time. Web sockets are then used to broadcast them to to everyone visiting the website.

By using a responsive bootstrap layout the site is optimised for desktop, tablet and mobile devices. Users can tweet directly from the site or their own apps and punches are animated using the sequencer.js libraries. Lastly BetVictor's APIs are used to pull in their latest betting odds for each fighter.