The ads you need to see before Super Bowl 50: Heinz sausage dogs, Ryan Reynolds in Hyundai, Willem Defoe in Snickers, Amy Schumer and Seth Rogen for Bud Light and more... 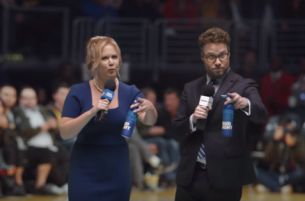 The Super Bowl is not just a big day for advertising. It is a season unto itself. Brands that have taken the plunge with one of those coveted multi-million dollar ad spaces now usually tease us days and even weeks before hand. We even get to see the Game Day ad.

It’s fair to say we’ve been bombarded with spots ahead of Sunday’s big game – and because we’re nice, we rounded all the spots have launched so far. And while much has already been revealed, CBS has reportedly held a selection of 30-second slots back for last minute advertisers. For a cool $5 million dollars per 30 seconds. For continuing coverage, including teasers and trailers, keep up to date on our dedicated coverage Super Bowl channel.

Avocados From Mexico follows up last year’s mock NFL draft with a spot from GSD&M set on an interplanetary museum.

Liam Neeson channels his inner ‘Taken’ in this spot produced by Ridley Scott and directed by son Jake Scott.

Drake’s super-hit ‘Hotline Bling’ gets messed up in Publicis Seattle’s offering for T-Mobile.

BBDO New York had quite the task ahead to top its spot for SNICKERS last year which featured Danny Trejo as a member of The Brady Bunch. This year they teased a Marilyn Monroe themed film – but who was it roughing up her sweet voice? Checkout the teaser and fully released ad below.

If you can’t catch them all, at least make a note to check out Pokémon’s Super Bowl spot. Created by Omelet in LA, it encourages viewers to ‘train on’.

This Budweiser spot out of Anomaly New York aims to combat drunk driving with the power of British acting royalty, Helen Mirren.

Steven Tyler is the first celebrity to star in Skittles’ ‘Taste The Rainbow’ campaign. It is suitably weird. Creative out of DDB Chicago.

Never did a troop of sausage dogs look so darn cute than in DAVID Miami’s HEINZ spot, ‘Meet The Ketchups’.

Adobe pokes fun at the marketers betting millions on the Big Game in this ad from Goodby Silverstein & Partners.

Grey New York and the National Football League (NFL) enlists Seal and his hit ‘Kiss From A Rose’ for a music video that celebrates babies born out of Super Bowl celebratory copulation.

Not strictly an ad, but Key and Peele are set to commentate on the entirety of the game for Squarespace. The comedy duo will debut two new characters: Lee and Morris, aspiring sportscasters from Atlanta. There is one catch, though. They don’t actually have the rights to talk about the game.

StrawberryFrog’s SunTrust Super Bowl ad is an eerie second-by-second reminder that worrying about finances can lead to you missing life’s important moments.

Hollywood heartthrob Ryan Reynolds proves to be quite the distraction in one of two Game Day efforts from Hyundai and its agency INNOCEAN.

RPA released Honda’s spot ahead of time and it features a herd of sheep crooning to Queen’s ‘Somebody To Love’.

To promote its unfiltered beer, Anheuser-Busch In Bev-owned brand Shock Top has launched a spot with a beer handle and its equally unfiltered tongue. Creative out of Anomaly Toronto.

Finance and tax software creator Intuit will, like it has in previous years, give up its adspace for one of three small businesses. This year, Death Wish Coffee won and RPA created the ad.

Agency MUH-TAY-ZIK HOF-FER encourages viewers to live in a bank less world in its ad for financial services company SoFi.

QuickenLoans aims to do for mortgages what the Internet did for buying shoes and plane tickets in this spot out of Fallon Minneapolis.

Toothpaste brand Colgate encourages people to turn the tap off when they brush in this powerful film.

For continuing coverage, including teasers and trailers, keep up to date on our dedicated coverage Super Bowl channel.