Your Shot: Wieden+Kennedy London’s Musical Ode to The Pain of Washing Dishes

Behind the Work 769 Add to collection 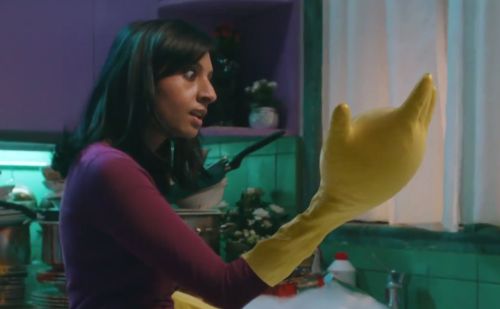 What better way to perk up on a sleepy Monday morning than a musical about our universal hatred of washing dishes? And that’s exactly what landed in our inboxes this week courtesy of Wieden+Kennedy London and dishwasher detergent brand Finish. Vibrant visuals, such as a conclusion in which a rubber glove blows up to monstrous levels, and direction from Ian Pons Jewell accompany the tune. What’s more, the campaign is being played out in China, Brazil, South Africa and Turkey – and while it might seem on face value that the world’s loathing of washing up be equal, it isn’t always that simple. LBB’s Addison Capper chatted with Wieden+Kennedy London creative directors Carlos Alija and Laura Sampedro to find out more.

LBB> What was the brief like from Finish and what were your thoughts when you first saw it?

CA&LS> The brief was really challenging since we had to engage people from multiple markets and regions, with remarkable cultural differences and sensitivities and very different reasons for not buying a dishwasher. The first thought we had was that we needed to tap into emotions in order to cut through and eventually change behaviour.

LBB> It’s set to play out in China, Brazil, South Africa and Turkey - how did you ensure that the humour and message of the song had equal impact in each market?

CA&LS> The humour is based in what we believe is a universal insight, so that works across all markets. We just had to ensure the irony of the musical was very clear, since not every culture appreciates more cynical approaches in the same way. There were some cultural sensitivities that had to do more with locations, casting, wardrobe or specific messaging, but nothing unusual for this type of global campaign.

LBB> This may seem like an obvious question, as everyone hates washing up! But talk us through the inspiration and research behind this campaign?

CA&LS> We went through a very extensive ethnographic research in four markets trying to better understand what people think about dishwashers and the reasons behind their perceptions and habits. But as the many differences arose, we thought that we'd rather look for what we all have in common with regards to hand washing.

LBB> Why did you opt for a musical?

CA&LS> We wanted to hold up a mirror to the routine of hand washing, but didn’t want to patronise the audience. A musical allowed us to create a playful, light-hearted way of doing this, reminding the audience of how ridiculous it is to still hand wash when there is an appliance that can do it for you.

LBB> Who did you work with on the composition of the music and what kind of brief did you give them?

CA&LS> The original melody came from Wieden+Kennedy London. We tried loads of compositions but after a few months on the project we all felt attached to the naivety and stickiness of the original one. Warner Music did a fantastic job of turning the demo into a much more elaborate composition.

LBB> Talk us through the exploding rubber glove - what inspired the decision to make that the central point of the campaign?

CA&LS> The yellow rubber glove represents hand washing and all the niggles associated with it. Exploding it is a metaphor of being rid of this annoying chore and leaving it to the machine that does it much better than you. The expanding and then exploding yellow glove is a memorable and disruptive visual that works really well across all media channels.

LBB> I love the art direction - from where did you look for inspiration for that?

CA&LS> We used some elements that come from other pieces of Finish work we've done in the past, like the vibrant colours, quirky cast and enhanced reality.

LBB> Why was Ian Pons Jewell, from FRIEND, the right director for the job?

CA&LS> Ian comes from the music promo scene, so he brought a very fresh approach to the treatment, with really interesting transitions from one vignette to the next. He also brought his unique eye to casting and helped create a more disruptive look.

CA&LS> Difficulties came with what we called ‘the cultural jigsaw’: getting the right balance in the cast, locations and insights. From the technical point of view, we needed to make something that nobody had seen before and make something unbelievable, like the inflation and explosion of a giant rubber glove, as real as possible.

LBB> What other elements are there to the campaign aside from the central film?