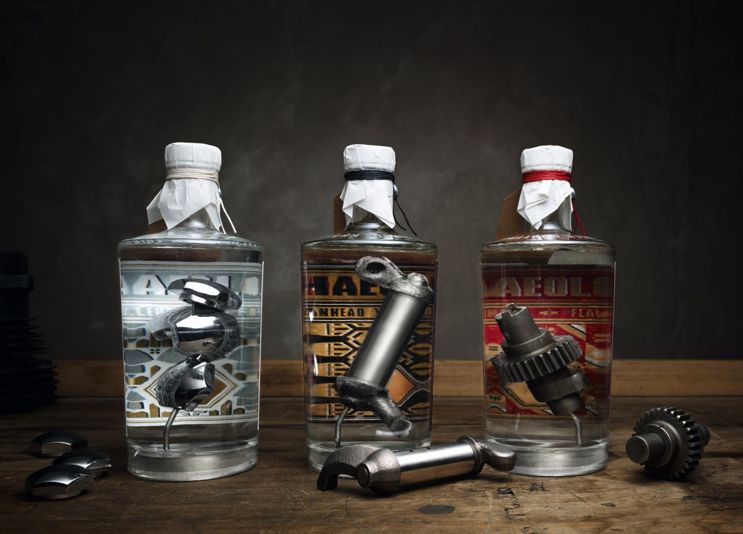 Uwe Ehinger has spent decades travelling through some of the planet’s most remote locations looking for antique motorbikes and restoring them for sale or using certain parts to build custom models. Thanks to the time and care that he takes with his work at his shop, Ehinger Kraftrad, he has earned the nickname ‘The Archaeologist’ and claims that everything he does “pays tribute to the things that used to be”. Now, thanks to a project developed with Serviceplan Hamburg and Studio Oeding, Uwe is paying tribute to the past in artisanal liquid form: they have distilled a gin that’s filled in bottles that contain original parts from antique Harley Davidson motorbikes. Yes, you read that right. We’re talking flathead camshafts and knucklehead screw-nuts lending their taste to the gin. In keeping with Uwe’s attention to detail the packaging and production is equally meticulous. LBB’s Addison Capper chatted with Christoph Everke, managing director at Serviceplan Campaign, to find out more.

LBB> What was the initial brief from Ehinger Kraftrad and what were you thinking when you saw it?

CE> Uwe Ehinger uses vintage Harley parts to design and produce his own special custom bikes. The first and most amazing impression was his enthusiasm and the perfectionism that he has developed over the decades towards his very special way of thinking about motorcycles.

LBB> What inspired the idea? Did you even know if it would be possible when you first began discussing it?

CE> The inspiration was Uwe himself. He is a true archeologist when it comes to searching for and finding the rarest parts and bikes all over the world. When we started the project, it was by no means clear whether everything would work out. From calculating the different melting points of all the materials (glass, steel, chrome and so on) to designing the printing techniques, everything had to be developed from scratch.

LBB> Tell us about the process of bringing this to life. There must have been so many steps along the way - finding the parts, preparing them, actually distilling the gin…

CE> Finding the parts was one big issue, but since Uwe Ehinger is one of the most renowned collectors of motorcycle parts, we were finally able to find enough originals from all over the world. The next big challenge was the reaction of the parts with alcohol. It took us at least four months to develop a process to make it work. After that we had to find the best way to bring together glass and steel. In the end Katrin Oeding, from Studio Oeding, found some old printing techniques and historical materials from the '40s and came up with the excellent and authentic design that combines the spirit of Ehinger Kraftrad and the idea of the distilled originals.

LBB> How do the motorcycle parts actually affect the gin? Do they give off any kind of flavour?

CE> This is our best kept secret! But yes – in a slight and very tasteful way.

LBB> The packaging is really unique. What inspired it?

CE> Studio Oeding’s idea was to use materials and design elements that were inspired by motorcycle parts in the '40s, which was not so easy. For example, there is only one Heidelberg Printing Machine in Germany on which we could print the special foils for the labels.

LBB> How was Uwe to work with?

CE> To be frank, great. He is a perfectionist and you can see that in the result. He always says: "And everything I do is a tribute to the past."

LBB> What is the distribution process? Can people purchase the gin?

CE> At the moment, it is only available in the Ehinger Kraftrad shop. But we are collecting all the requests and declarations of interest. After that, we will decide whether to launch a second edition.

CE> Basically the combination of glass, metal and alcohol. We had to test it in different ways with different manufacturers and after a few months we finally found our solution.