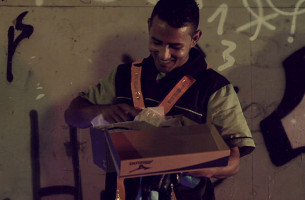 As wonderful as the glitz and glam of superstar-laden campaigns can be, it’s always so refreshing to see a piece of work from a sports brand that celebrates real people, in an authentic, believable way. This Christmas, Mizuno and F/Nazca Saatchi & Saatchi celebrated São Paulo’s garbage collectors, a group of workers they’ve labelled ‘true marathon runners’, on account of the fact that they run an incredible 20 kilometres every day. LBB’s Addison Capper caught up with F/Nazca Saatchi & Saatchi creative Rodrigo Visconti to find out about working with these everyday athletes.

LBB> The ‘Invisible Runners’ idea is a really interesting approach for a sport brand. It’s refreshing to see something that focuses on real people as opposed to big, flashy sports stars. What kind of insights drove the idea?

RV> Our insight was the reason you liked the idea: we wanted something real, something that did not look like advertising, and was focused on real runners.

LBB> What do you think that says about Mizuno as a brand?

RV> For us, Mizuno is a brand that relates directly to amateur athletes and is concerned with performance. This is the profile of consumers who form the runner segment: they do not perceive running as a remunerated activity, but instead they project high performance on their leisure activity. They are dedicated to pure pleasure and become the source of inspiration to other runners.

LBB> Why did you choose to focus on garbage collectors?

RV> Garbage collectors are true marathon runners of everyday life. So the idea was about them from the beginning. They can run roughly 20 kilometres without even noticing.

LBB> I imagine there was a lot of research around their collectors’ habits. Can you tell us a bit about that?

RV> Yes, we researched and visited all companies providing these services in São Paulo in order to understand the routines, schedules, and dynamics of garbage collectors. This was how we calculated the average distance that these professionals cover, in addition to picking up heavy bags and making the effort of tossing them in the back of the truck.  Theirs is a routine that leaves no doubts about how well these athletes are physically prepared.

LBB> What kind of briefing did you give the garbage collectors in the film?

RV> The only briefing they had was to carry out their work normally. They had no idea about what would happen. All they were told was that a sports brand wanted to show how tough their daily routine was. Their reaction upon receiving the shoes was real and recorded in a single take. If you notice carefully, they were even a little embarrassed when they found the running shoes. They weren’t sure how to act and it took them a while to understand that it was their Christmas present.

LBB> How long did you shoot for?

RV> During the week of Christmas, the brand followed the routine of this team through the streets of São Paulo. There were 40 hours of footage and research, streets run, and lots of garbage collected to understand the dynamics of collectors. The result of this project is the mini-documentary Invisible Runners.

RV> The tricky part was the actual delivery of the shoes, since it required approval from their workers union, as well as from the companies responsible for waste collection.

LBB> And how about the most memorable moments?

RV> Their reaction receiving the running shoes and finding out that they were being honoured was priceless.